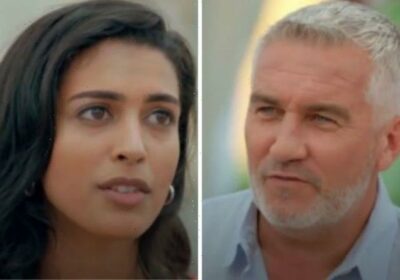 As tensions were high in the tent during the last week of the series, finalists Giuseppe Dell’Anno, Chigs Parmar and Crystelle Pereira all seemed to buckle under the pressure in some way. Unfortunately for Crystelle, her final showstopper on the Great British Bake Off couldn’t even be sampled by the Channel 4 show’s judges Paul and Prue because it was “raw”.

When it was Crystelle’s turn to bring her showstopper to the judges, she found out the hard way that her focaccia had failed to cook all the way through.

“Right, focaccia,” Paul commented as the finalist presented her dish.

She explained: “It’s a za’atar. garlic and honey focaccia.”

After tasting the bake, Prue awkwardly commented: “Uh, this is not recognisable as focaccia.”

“That’s raw dough,” Paul added. “What have you done?

“I mean that is actually raw… has it been in the oven?”

She continued: “I don’t know what happened, that’s bizarre.”

Paul went on: “It’s got no rise on it at all. That’s inedible that one.”

Observing the rest of the dish, Prue stated: “That’s a pity.”

Paul concluded: “But overall, I think your flavours and what you did try was very good.”

The blunder seemed to cost Crystelle a lot, and she wasn’t crowned winner of the series.

After a tense wait, Giuseppe received the title.

Following his win, Crystelle humbly commented: “I am so happy for Giuseppe.

“He’s an incredible guy. So genuine, an insane baker and he really, really deserves that win.

“His family are going to be so proud of him.”

The Great British Bake Off is available to watch on All4.