‘It’s an excuse by the BBC!’ Andrew Rosindell erupts at Garraway in national anthem row 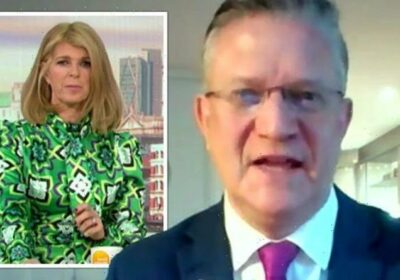 Rosindell passionately claimed the BBC were “making excuses” as to why the national anthem couldn’t be broadcast. Good Morning Britain host Kate Garraway argued there was no end to broadcasts anymore meaning it wouldn’t be “natural” to just slot it into the TV schedule. As the pair clashed, Rosindell erupted at the presenter.

Rosindell began: “Absolutely we should be proud of our country and uphold traditions, our heritage.

“There is no better way of doing that than to sing together the national anthem f our country, which represents literally everybody.

“It doesn’t matter what background you are or what differences there may be, the one thing that unites us all is being British.

“There is no better way to restore this on BBC One, and other broadcasters as well than the year of the Queen’s Platinum Jubilee.

“I think unfortunately so few people ever hear the national anthem, let alone know the words, it’s never sung in schools, it’s never played by public broadcasters at the end of the day.

“Even ITV by the way used to do it. It is time to restore it.

“What’s wrong with a few seconds at the end of the day before the switch over to other channels to have the national anthem of our country? I think it’s time to bring it back.”

Garraway hit back: “Time has changed. It was played by channels as it marked an end of broadcast but we don’t have an end anymore.

“There’s not a natural moment that can be reinstated.”

But angered, Rosindell erupted: “That’s completely wrong! So BBC One stop broadcasting, they switch to another channel.”

Garraway interrupted: “The viewers don’t see it that way, you know technically but as far as the viewers are concerned, we’re all just watching the same channel and it carries on to a different programme.”

Rosindell hit back: “If you could let me finish. The viewers, it’s not about when the programme changes.

“It’s about the playing it at a certain point in the day. Most people watch television to late in the evening and then it switches over to News 24 or something else.

“That’s the point it could be played. The idea it can’t be done because there isn’t a formal close down is simply an excuse by the BBC.

“It is a pure excuse and that’s not a reason not to play the national anthem.”

Passionate about the campaign for the anthem to reinstated, Rosindell claimed: “It’s not worked for the last so many years because there’s too much PC stuff going on.

“It’s nothing to do with the switch over,” later adding: “I think that’s wrong I think young people are patriotic.”

Many viewers flocked to Twitter to share their opinion, with Clair Jefferson posting: “In America, before students begin their school day, they stand with their pledge of allegiance, and they sing a national anthem. I Can’t see the harm in saluting the Queens anthem here.”

Joanna Aichroth added: “I’m not against the NA being played daily but how about instead of forcing patriotism we actually take action to improve the country to something that i could be prouder of?”