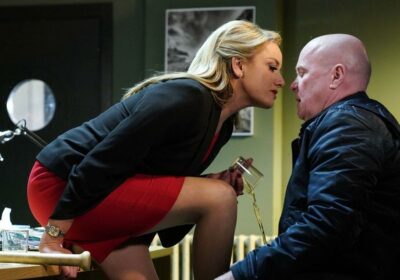 EastEnders fans have been left reeling after the shocking revelation that Janine Butcher plans to seduce Mick Carter while his wife Linda is out of the way.

The storyline isn't the first sizzling affair in the making to rock Albert Square and certainly won't be the last.

Over the years there have been some pretty sordid goings-on behind the scenes for some of Walford's most iconic families.

From The Slaters to The Mitchells there's never a dull moment to be had when it comes to EastEnders cast of saucy Londoners.

Here we take a look at some of the most explosive affairs ever to take place on the soap.

Max and Stacey caused absolute chaos when they embarked on a sordid love affair that ultimately culminated in the death of his son and her husband Bradley Branning.

When Stacey was first introduced to Max as Bradley's girlfriend, he made it clear that he was not a fan of their relationship.

Things took a turn for the worse when Stacey fell pregnant and Max convinced Bradley to tell her that he wanted her to abort their child.

The aftermath led to their relationship falling apart, and seeking revenge Stacey decided to make a move on Max and their dalliance began.

However, when his wife Tanya fell pregnant, Max was left with the moral dilemma of saving his marriage or carrying on his affair.

He opted to stick with Tanya and Stacey very quickly ended up back in Bradley's arms with the pair becoming engaged.

On the eve of Stacey and Bradley's wedding, she and Max shared what was meant to be one last kiss, before finally laying their romance to rest.

But, like all good EastEnders plot lines, Christmas reared its chaotic head, and with it came the revelation that Max's daughter Lauren had inadvertently recorded the kiss on camera and made sure it got played to the whole family as they gathered for their festive celebration.

Both couples subsequently filed for divorce, with Tanya embarking on a steamy rebound affair with fan favourite and Stacey's sexy brother Sean Slater.

The events that unfurled in the messy legal proceedings led to Tanya drugging and burying Max alive in the woods, and poor Bradley falling to his death from the roof of the Queen Vic after being accused of murdering Archie Mitchell who had attacked and raped Stacey.

The real killer was in fact Stacey and Max eventually helped her flee Walford in emotional scenes where he declared his love for her as she departed Albert Square.

Since then Max and Stacey have been undeniably linked through the years, with her even cheating on her most recent husband Martin Fowler with her former flame.

Sharon was married to Phil's brother Grant when the storyline that would become known as Sharongate unfolded.

Feeling miserable in her marriage to Grant after a series of heated rows and incidents left her questioning if she had married the right brother, Sharon grows closer and closer to Phil over several years worth of plot lines.

Things finally came to a head when Grant repeatedly left Sharon to cope with running the Vic by herself or with Phil's help and she starts to confide in him.

The emotional conversation led to a steamy kiss and their affair kicked off with Sharon rolling in and out of her relationship with her husband's brother over a number of years.

Things finally came to a head when Grant discovered a recording of Sharon talking to best friend Michelle Fowler confessing she has had sex with Phil.

He played it to a packed pub at Phil's engagement party before beating his brother to within an inch of his life.

The brothers eventually reconciled and Sharon attempted to win back her husband for several months before finally accepting his demands for a divorce and heading to America to be with her mother Angie Watts.

Teenage hunk Keanu was dabbling in romance with Sharon's young stepdaughter Louise Mitchell when his interest was sparked by a different blonde bombshell in the household.

Keanu began to pursue Sharon, whose marriage to Phil had hit the rocks due to his distant behaviour and lack of interest in her.

Perceiving his behaviour as meaning he was no longer in love with her, Sharon began to enjoy Keanu's advances and ultimately succumbed to her desire and got in a steamy clinch with him in the kitchen of her home.

The pair then embarked on a passionate affair that saw them romping any and everywhere including in cars at Phil's garage at The Arches.

However things became increasingly complicated as Phil paid Keanu to take care of Louise leaving the young couple spending more and more time together, and she began falling for her caretaker in a big way.

Soon enough Keanu's fling with Sharon came to an end and he became deeply romantically involved with Louise after a kidnapping brought them even closer together.

The pair became physically intimate and their relationship progressed, however, things fell apart pretty rapidly when Louise discovered that initially, Keanu had only been with her because Phil was paying him.

She had just found out she was pregnant with his child and sought advice from best friend Bex Fowler as she decided to get an abortion, however she failed to go through with it, but when confronted by Keanu didn't tell him the truth.

Distraught Keanu sought solace in a chat with Sharon where he clashed with her having found out she was the one who had driven Louise to the clinic.

But the anger soon turned to passion and the pair ended up romping at The Arches – a tryst that would lead to Sharon also falling pregnant with his child.

Things went from bad to worse when ultimately Phil found out that both of his girls had been knocked up by the young man he had taken under his wing.

With his life under threat, Keanu eventually fled the country and hasn't been seen since. When Patrick hired Pat to work for him at the car lot it wasn't just his books he was hoping she would get on top of.

The pair very quickly began a casual affair but when Stacey Slater figured out what is going on she told Yolande and the trio had a showdown which resulted in slaps flying everywhere.

Ultimately the fling came to an end and Yolande decided to stand by her man for a good few years longer before they divorced.

Mel was married to two very different Walford businessmen during her run in Albert Square, with Ian Beale first to walk down the aisle with her, before she found true love with suave criminal mastermind Steve Owen.

However, their relationship wasn't without its issues and while they seemed perfect for one another Steve did have to forgive Mel when he found out she had slept with his arch-enemy Phil at Christmas 2000.

Steve however got past it, knowing that Mel was his true soul mate, and the pair tied the knot in March 2001.

Keeping it in the family appeared to be the theme for Bianca and Carol when it came to Dan Sullivan.

Bianca dated the much older man first, which came to light when her mum showed up on Albert Square with her new beau.

Despite being happily married to childhood sweetheart Ricky "Rickaaaaay" Butcher at the time, seeing Dan brought back a flurry of feelings for Bianca and it wasn't long before the pair were embroiled in a steamy affair.

But it didn't take long for Carol to wise up to what was happening and when she clocked on she made sure Ricky was also in the loop.

The affair ended and Carol, Ricky and Bianca all departed Walford leaving Dan behind to kickstart his iconic failed bromance with hardman Phil Mitchell.

Syed Masood was seemingly happily in a relationship with and eventually married to stunning Amira Shah, but in reality, he was battling to hide his sexuality from his family over fears of the repercussions of being a gay Muslim man.

However, Syed found it increasingly difficult to deny his true sexuality as he grew closer to local hunk Christian Clarke.

The ever increasing romantic interest between Syed and Christian had fans addicted as they hoped for a happy ending for the couple.