Insecure EP Compares Those Lawrence and Nathan Showdowns to a Western 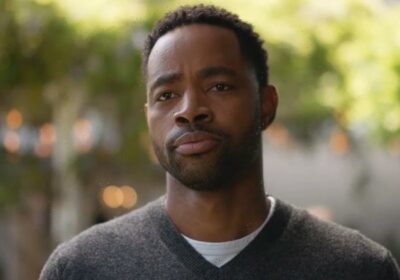 Warning: This post includes spoilers from Insecure Season 5 Episode 9. Proceed at your own risk.

The first showdown on the HBO rom-com came when the men casually but bitterly debated which town has better barbecue — Los Angeles or Houston — at Derek and Tiffany’s going-away party. Jay Ellis’ Lawrence first fired verbal shots about transplants not being in LA long enough to write off the city’s tasty grilled cuisine. And Kendrick Sampson’s Nathan retorted with, “Once people have Texas barbecue, they know it’s good.”

But Lawrence refused to let it go and when he remarked, “Barbecue must not be good enough to keep them there,” it was abundantly clear that neither man was talking about chicken and ribs anymore. Later that night, their simmering anger escalated to physical violence after Lawrence ambushed Issa with an “I love you.”

“I didn’t see one as a good man and the other as a bad man,” Penny divulges to TVLine. “Just two cowboys who had showdowns. To me, there were a lot of Western motifs. The going-away party is ‘the town,’ Issa is the ‘damsel in distress,’ and Molly and Taurean are the ‘town drunks.” 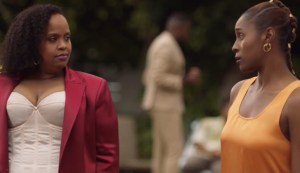 Costume designer Shiona Turini’s thoughtful Western-inspired selections in the installment, titled “Out, Okay,” can be found everywhere from Kelli’s bustier to Nathan’s light-colored shirt and Lawrence’s dark gray sweater. Issa rocked a Native American-friendly hairstyle and Condola rocked an updo straight out of John Ford’s 1939 film Stagecoach. All of this was as intentional as the camera angles, says Penny, who enjoyed a cameo as a nameless catering waiter.

“Westerns are played out in a lot of looks to build tension,” Penny reveals, adding that he turned to Ford and Sergio Leone’s work for inspiration. “I wanted to play up a lot of who’s looking at who and why. So once I noticed that about the script, I just embraced that. Like some of my shots are close-ups and others are played off the shoulders and hips, as if they had guns.”

Penny and the show’s writers didn’t pen Episode 9 as a Western, he shares, but “I noticed the similarities as I read it and watched a lot of Once Upon a Time in the West, The Man Who Shot Liberty Valance, High Noon, et cetera … not obvious references for Insecure.” 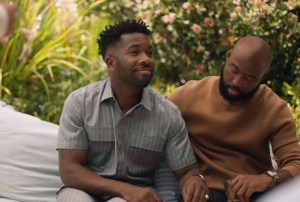 The humor that crept into scenes in spite of or because of the awkward and intense energy was, however, very much an Insecure specialty and something the cast wanted to get just right, explains Jean Elie, who costars as Ahmal, Issa’s brother.

In the scene where Lawrence and Nathan bickered about barbecue, for instance, Ahmal tried to intervene to lighten the mood. Instead, Nathan used Ahmal’s barbershop segue to wound Lawrence with news that he and Issa would be searching for apartments together.

“That was a challenging yet fun scene to be a part of,” Elie expounds. “You could literally feel the tension between them. It took a few takes to get it just right. But everyone was so sharp in every take.”

What did you think of the conflicts between Lawrence and Nathan on Sunday’s Insecure? Do you think Issa will dump them both as a result? Drop your thoughts in the comments.