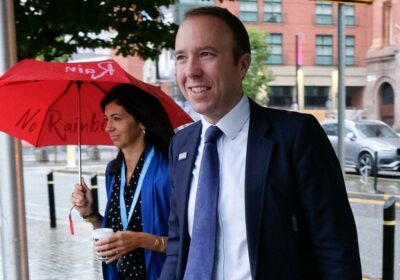 Former Health Secretary Matt Hancock's girlfriend Gina Coladangelo is set to be flying out to Australia to support her boyfriend during his appearance on I'm A Celebrity… Get Me Out Of Here!, with the pair set to reunite on his departure from the jungle.

While they won't have any contact with one another while Matt, 44, is in camp, the couple will be in the same country with Gina awaiting him on his exit.

According to the Daily Star, insiders have revealed that Gina, 45, is set to land in Australia within the next week.

The pair's relationship made headlines last year when they were caught kissing on CCTV in Whitehall. Both were married to other people at the time, with the affair costing them both their jobs and marriages.

Resigning as Health Secretary following the revelation of his affair, Matt has now been suspended from the Tory party due to his reality TV stint, and while he remains an MP he may not be allowed to run as a Conservative candidate at the next general election.

Many other politicians have criticised his decision to take part in the ITV flagship show, with Climate Minister Graham Stuart saying: “MPs should be attending to their duties and with so many people working from home these days, it is possible to work from wherever you want in the world.”

He continued: “It’s not really possible to do that from the jungle. While you’re eating various worms and sticking your head in unpleasant places, it’s quite hard to concentrate on what’s going on in your Suffolk constituency.”

While his appearance on the show is proving a somewhat controversial decision, ITV bosses have defended their choice to have the MP take part.

Having been told about the backlash, executive producer Olly Nash said: "It's always an individual's choice to come into camp, isn't it? And at any point, any celebrity can say I'm A Celebrity, Get Me Out of Here. So that's the only thing really to add. I think.

Opening up about their decision to sign a politician up for this year's I'm A Celeb, Olly added: "It's always good to get a good cast in an ensemble cast.

"That's really the basis of putting everybody together. We cast everybody from all sorts of walks of life and always have done. We have had politicians going back for many, many years.