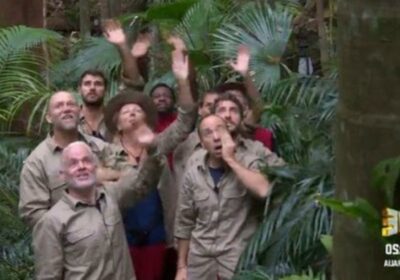 Matt Hancock was seen wiping away a tear after surviving I'm A Celebrity… Get Me Out of Here's second eviction on Sunday night.

The controversial political figure, 44, remains in camp in the Australian wilderness, which might suggest viewers simply enjoy watching him squirm in Bushtucker Trials.

However, as the voted-off Scarlette Douglas walked across the famous I'm A Celebrity bridge on Sunday, waving goodbye to her campmates before sitting down with presenters Ant McPartlin and Dec Donnelly, Matt became visibly overwhelmed by the occasion and was seen wiping away a tear.

Meanwhile, during a video link interview for Good Morning Britain today, 35 year old presenter of A Place in the Sun, Scarlette, managed to expertly swerve a question regarding her relationship with Matt in camp.

"For me, when Matt came in I said, 'You know, there are a lot of things you've done that people aren't happy with and you have to understand that emotions are going to be running high in camp and you have to get why that is,'" she told Richard Madeley and Susanna Reid.

"So in the jungle, we will get on but it doesn't mean that outside we're gonna be best mates at all. But in here, we'll just work together as a team and that's all we can do. That's the most important thing."

Prodded by Richard on whether she actually liked her co-star, Scarlette commented: "I like his get up and go. I like the fact that he has drive. I like that he's determined. I like that he won't give up on anything.

"Do I like Matt Hancock specifically? I don't think I had enough time to really get to know him because when he came in he was trying to win us all over," she caveated.

"He was doing his best to make sure he's involved in everything but for me it was just I want to make sure as a camp we all get on."

One campmate she did take a particular liking to, however, was Gogglebox's Babatúndé Aléshé.

"He was like my brother," gushed Scarlette. "I'm going to miss him so much. We just got on so well.

"We'd sometimes give each other the side eyes and that just meant we knew exactly what we were thinking. We were both always thinking the same thing. But we just had a great time, proper banter."