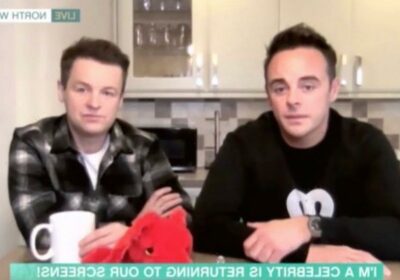 Ant McPartlin has confessed the I'm A Celebrity… Get Me Out Of Here! crew are worried about this series as it prepares to return to our screens.

Storm Arwen has caused "technical difficulties" at Gwrych Castle, where I'm A Celeb is being filmed, which forced the show off air for three episodes over the weekend.

Ahead of the show's return on Tuesday 30 November, Ant and Dec appeared on This Morning to spill the details on the show to hosts Holly Willoughby and Phillip Schofield.

As Phil, 59, quizzed Ant and Dec over the atmosphere on set, 46 year old Ant admitted: "Well, there's a slight worry because there's more bad weather coming next week. But, I think it's just temperatures dropping and maybe a bit of snow, a bit of frost. So I think we can cope with that."

Dec added: "You never get this in Australia!"

To which Ant said: "It's been a challenge but like I said, we're back on air tonight and we can't wait to get going again because it's just hitting its stride. The show was really going and it's just such a shame we came off air but we're back on."

During the the chat, 40 year old Holly asked the pair when they were told how badly the storm had hit Gwyrch Castle.

Dec explained: "We got a call on Friday to say: 'Come to the site as soon as possible' because there was a storm coming and we were gonna have to pre-record the show to just be safe – just incase the satellites went down.

"As we went home and the show came out, we came to our cottages here and we could hear the winds howling and blowing so we knew it was pretty rough.

"And then we got the call on Saturday morning to say the wind has pretty much destroyed the tech base – the marquees had come down, trees had fell down, so the site was unsafe. Nobody was allowed back on the site until they'd been on and done a whole geological survey to see what had happened.

"So there was no choice but to just pull the show over the weekend, which we were just gutted about."

Dec added: "And then in the end the celebrities had to come out and put them back into quarantine so they're all in individual quarantines so it's been a huge upheaval."

He then praised the crew who have been working in a "monumental effort" to get the set "back up and running".

Stay up to date with all the latest on I'm A Celebrity stars and much more by signing up to OK!'s daily celebrity newsletter.