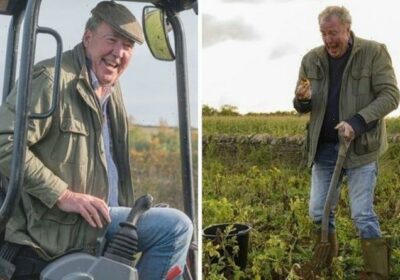 Fans are patiently awaiting season two of Amazon Prime’s Clarkson’s Farm, which followed Jeremy Clarkson as he learnt his way around his rural farm. The presenter joined the Chris Moyles show for a radio interview where he opened up about his experience farming and detailed the incredibly expensive mistake he made.

This year, viewers got to see a different side of Jeremy Clarkson as he stepped away from his usual motoring series to learn about farming.

With no previous experience, Clarkson’s Farm was hilarious viewing for fans as they watched the presenter make multiple mistakes.

He was forced to deal with disobedient animals, dreadful weather and unresponsive crops.

Under the watchful eye of 21-year-old farm manager Kaleb Cooper, Jeremy got to grips with running his own farm.

DON’T MISS: Robson Green ‘walked off’ from acting role due to co-star fallout

The Top Gear presenter originally purchased the land in 2008 and contracted a farmer who lived in a neighbouring village to care for it.

Sadly after his passing, Jeremy decided it was time to learn a new skill and tend to his farm.

Filled with heaps of banter, viewers were loyal and consistently tuned in to watch him make errors, then get told off by Kaleb, who wasn’t afraid to call out the 61-year-old.

However, as well as planting seeds in the wrong direction or not ordering the correct amount of lorries, Jeremy also made an “incredibly expensive” mistake.

Speaking to radio host Chris Moyles, the presenter opened up some vehicles he purchased in the upcoming season two and confessed: “I didn’t know, I was buying them and I didn’t know what they did, they all just looked like something you’d use to cut your arm off.

“Bits of farming equipment you just think ‘well if I fell in that, that’s the most uncomfortable way of going through the pearly gates’, I could possibly imagine,” Jeremy explained.

He revealed: “It’s an incredibly expensive thing to do, I think I had to spend a quarter of a million pounds just to get the stuff I needed.”

He disclosed: “The fertilizer, the seed and the equipment, and you really think ‘God, this better grow’ and not when its raining and you think ‘I can’t put any of the stuff in the ground, I can’t plant it, it’s all just rotting’.”

Jeremy went on to explain his upbringing in Yorkshire made him think he was being “ripped off” when anything costs more than “eight pounds.”

The presenter stated: “I get in a panic and have palpitations, so farming really wasn’t ideal for me because I can’t grow things and I don’t like spending money.”

Thankfully for fans, season one became a huge hit and Jeremy confirmed a second instalment had been commissioned.

During a Q&A on Instagram, he also commented on when it would air and shared: “Well we film for a year because that’s how farming works.

“The editing for six months,” he added, “Then it has to be translated into every language in the world.”

With this information, it’s safe to say season two could air in 2022, assuming filming will wrap up in early spring.
Express.co.uk will be updated with new information.

In the upcoming instalment, fans can also expect to see how Jeremy and Kaleb will deal with the pandemic and what effect it will have on farming.

Clarkson’s Farm is available to stream on Amazon Prime Video.