How ‘Squid Game’ Built Challenges as Bleak as Our Reality

There’s a shot in the first episode of “Squid Game” that works like a keystone for everything director Hwang Dong-hyuk wanted the series to do and be. It happens just as the contestants are all assembling for the very first game of Red Light/Green Light. As the players are looking around, the camera crouches low, so that we can see the full, freakish size of the giant robotic girl “leading” the game, the two enforcers in bright pink on either side of it, and the corners of the set meant to look like a field and sky, warm and inviting. Then, just above, we see the real sky, a different colored blue, which undercuts the verisimilitude of the game set.

At key intervals throughout the first game — when the players panic and start to run, futilely, for the doors, when Seong Gi-hun (Lee Jung-jun) finds himself staring down the impossible distance to the finish line, trapped by the body of a player who’s already been shot, as blood sprays out of eliminated players once “Fly Me To The Moon” starts playing, and chillingly as the dome closes over the killing field at game’s end — Director Hwang creates compositions that emphasize that artificial horizon line — high prisonlike fences that are trying to behave like a sunny sky — and the ways in which the game is packaging a kind of nostalgia in its look that belies how absolutely vicious it is.

“In this extremely competitive capitalist society that we live in, we are given the illusion of freedom. It makes us feel like we’re capable of anything,” Hwang told IndieWire. “However, as we live longer, we realize that we don’t have that much freedom in our hands.” The illusion of freedom is as key as the crushing reality that the players find themselves in a trap in “Squid Game” and the cruelty of that illusion guides the design choices made for the game’s sets and player costumes. 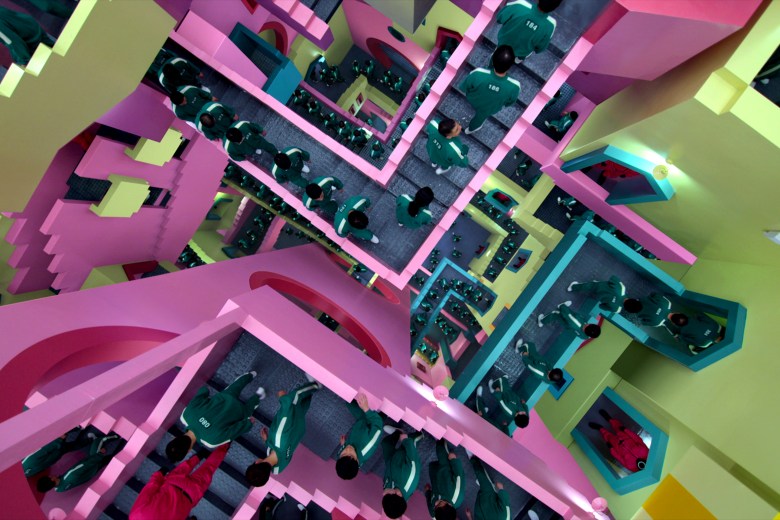 For Hwang and his “Squid Game” collaborators, the series was their first time working on a survival thriller, and they actively avoided immersion in the genre. As production designer Chae Kyoung-sun told IndieWire, “That is why I was able to create something that is quite new and fresh about the genre.” The newness and freshness came in part from Director Hwang’s experience of going to casinos in Las Vegas while he was studying in the United States.

“When I went to the hotels, especially the casinos, seeing what they were like inside: the artificial fake sky, the fake gondola, and, you know, how they recreated the Paris sunsets through the fake sky and the artificial decorations, I had a very strange feeling, almost that it was a shock to me,” he said. “And I really was impressed by that strangeness that you can only feel when there is that juxtaposition of what’s real and what’s artificial. It felt very different — at the same time very fantastic as well. So when we were first thinking about how to create the spaces that the games would be played in, I was reminded of that feeling.”

Chae and costume designer Cho Sang-Kyung needed to visually capture that strangeness. Cho suggested that the game uniforms be consciously a little bit retro in look, “since the games in the dramas were ones we played as children in the early 1980s.” The team also discussed making uniforms of, more or less, uniform size, so that some would fit well and some would not. The cookie-cutter approach to the players was also reflected in how Chae designed the visual spaces for the players: the living quarters and the maze-like run-up to the game sets. “I mean at first 456 people are walking in that [maze] space, but then in the end, only three people are walking in there and it feels a lot more empty, and that is creating a certain mood,” Chae said. “I wanted such changes to unfold organically from episode one to episode nine. And that was, that is the point of production design for me.” 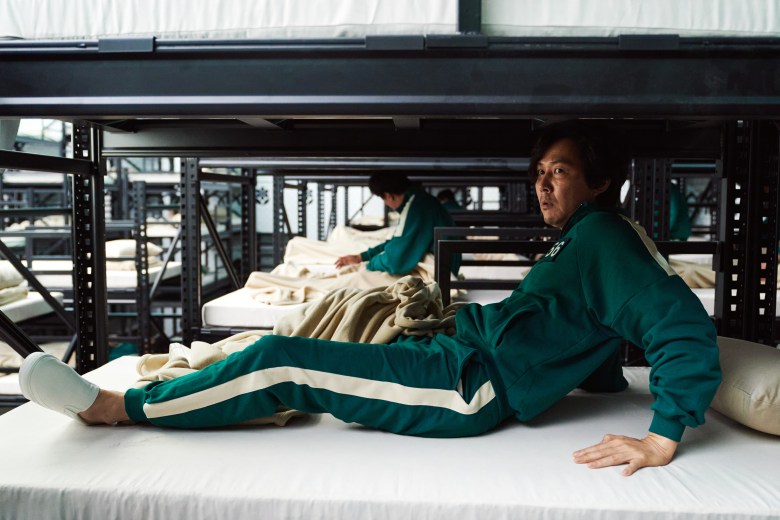 This change unfolds organically in the players’ living quarters, too, as the remaining characters feel smaller and smaller in that vast space the further into the games they get. When boiled down to an individual level, we see something in “Squid Game” that anyone who’s been to a Vegas casino knows well — the space looks more glamorous from a wide angle, and can be a disorienting trap up close.

Cinematographer Lee Hyeong-deok tried to reference that disorientation in the compositions for the games as well. “I thought a lot about the contrast between the beautiful world once seen through the eyes of innocent children and the dark, gloomy world of grown-ups,” Lee told IndieWire. “For the spaces for each game, I tried to think about images that look familiar, but are somehow slightly off-balance and distorted; images that are too bright and clear to the point that they are scary.”

The importance of brightness, contrast, and color was also evident in the costume and set color choices, both for the players and for the enforcers. The managers, Chae thought, look much scarier in hot pink and anonymous, geometric masks than the would in any sort of black and spikey armor, something that Cho ran with in the design and color choices of the costumes.

“Though it might seem obvious to differentiate between the masked men — who had to cover their entire bodies given the purpose of the scenes and according to their task — and the participants with complementary colors, I did think that the colors we used would show the difference between this series and others,” Cho said. “Also, I took into consideration the fact that our poster would be in the midst of a sea of other pieces’ posters on the Netflix page for viewers to click on, and tried to create visual highlights so that ours would stand out.” These stand-out accents took the form of the show’s now-iconic bright green track suits for the players, but also the (cost-saving) detail that the uniforms have bright white velcro patches for each player’s number. The color choices were meticulously guarded by Lee, who said made sure that variations in brightness on the set did not result in a lot of difference in color saturation. “The key was the difference in tone and mood between the game arenas and the outside world,” Lee said.

That juxtaposition was at the heart of how Director Hwang conceived of the show’s set pieces. He outlined two principles that guided him and his team in developing the games’ look. “The first is that it has to be a space that will allow you to return to your childhood. And then the second is the mix of what’s real and what’s artificial much like what I saw in Vegas,” Hwang said.

That translated for Chae into creating both living space sets and game sets that pushed on the artificial limits of the carefree, storybook nostalgia the games are trying to achieve. “In terms of the alleyways, I mean, these are the spaces where my parents’ generation would have played [with] their friends in the ’70s and ’80s, but there is actually no home there in the alleyways. There are only alleyways,” Chae said. “Nobody actually has a home to return to.”

“I think [the sets] played a huge role for the actors because I saw them walk into the set and it was almost like they were going through the same mix of emotions as the players in the story would,” Hwang said. When they first walk into this strange place where they would have to play these games, they all felt fear and I could also see that they were fascinated. So watching them sort of look around and taking pictures, I thought that this is going to be a great set.” 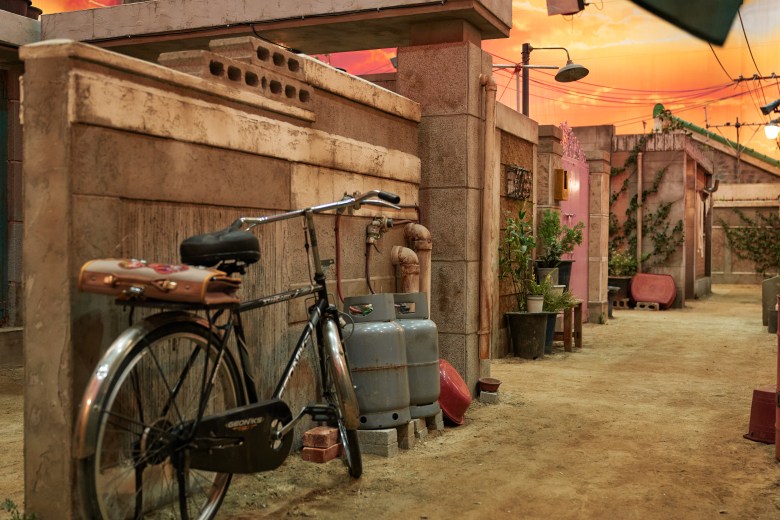 The personalization of each game, then, really came through the choices of how the camera captures the individual horror of each one. Lee thought deeply about the experience of playing Red Light/Green Light, for example and that the key to that experience was movement interrupted by sudden pauses. “I captured the details of the movements of the contestants by relying heavily on the high-speed camera. The distortion of the wide lens also emphasized the grotesque nature of the game,” Lee said.

Meanwhile the Honeycomb challenge was driven by the stress of players to nail the precise, delicate movements, so Lee, “used a wide range of extreme close-ups (e.g. the shape of the honeycomb pieces, the tongue that licks the honeycomb dalgona, beads of sweat, the needles used to carve out shapes, eyes of different contestants, and the contestants’ facial expressions) to effectively capture how desperate the contestants are.”

The different ways that the games capture the players’ horror and desperation get at the heart of “Squid Game” for Director Hwang. “‘Squid Game’ was a piece where the visuals had to be immaculate. It was so important that they were done in the right way,” Hwang said. “I wanted to bring these different elements… to portray that idea that what’s cruel and terrifying, depending on where you’re standing and watching it from, can just be entertainment.”