Home » TV & Movies » How old is Joan Collins, what is her net worth, who is her husband and what has her son Alexander Newley said about his father?

How old is Joan Collins, what is her net worth, who is her husband and what has her son Alexander Newley said about his father? Here's all you need to know about an actress that oozes glamour, and who's been involved in several high-profile marriages… 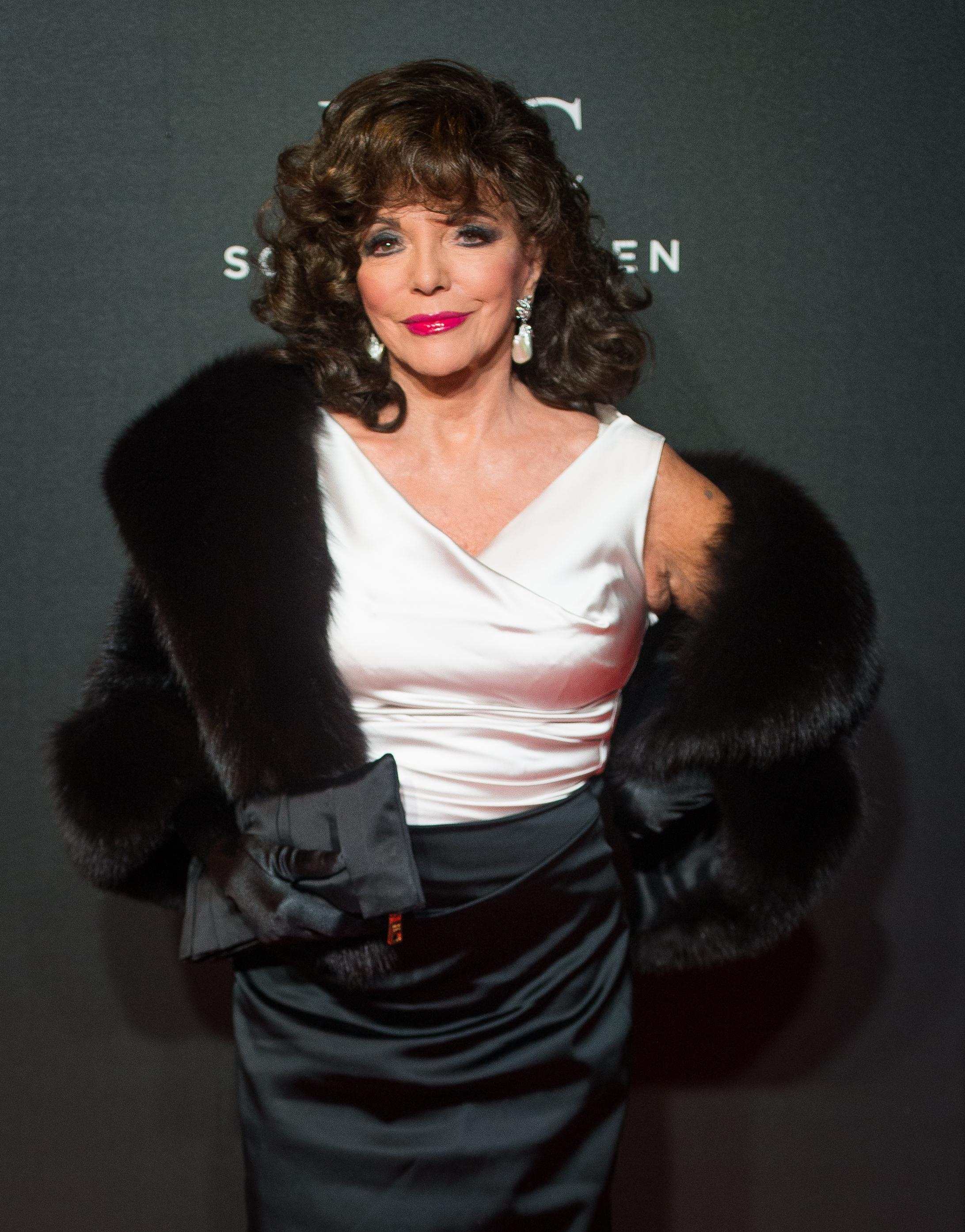 Who is Joan Collins? What was her early life and career?

Joan was born in Paddington, London and is the daughter of Elsa Collins (née Bessant), a dance teacher and nightclub hostess, and Joseph William Collins who was an agent and had clients including Shirley Bassey, the Beatles, and Tom Jones.

She was educated at the Francis Holland School, an independent day school for girls in London and then trained at the Royal Academy of Dramatic Art.

Joan made her feature film debut as a beauty contest entrant in Lady Godiva Rides Again (1951) followed by The Woman's Angle (1952) in a minor role as a Greek maid.

Next was a more significant role as a gangster's moll in Judgment Deferred (1952).

Her big break came when the Rank Organisation signed her for a major role in I Believe in You (1952).

In the light of the Harvey Weinstein sexual harrassment allegations Joan has spoken out about the Hollywood casting couch.  She says she was passed over for the role of Cleopatra because she wouldn't sleep with the studio head.

The role went to Elizabeth Taylor even though Joan was the front runner and had tested twice.

Joan is the older sister of the late best-selling novelist Jackie Collins, who passed away in 2015. 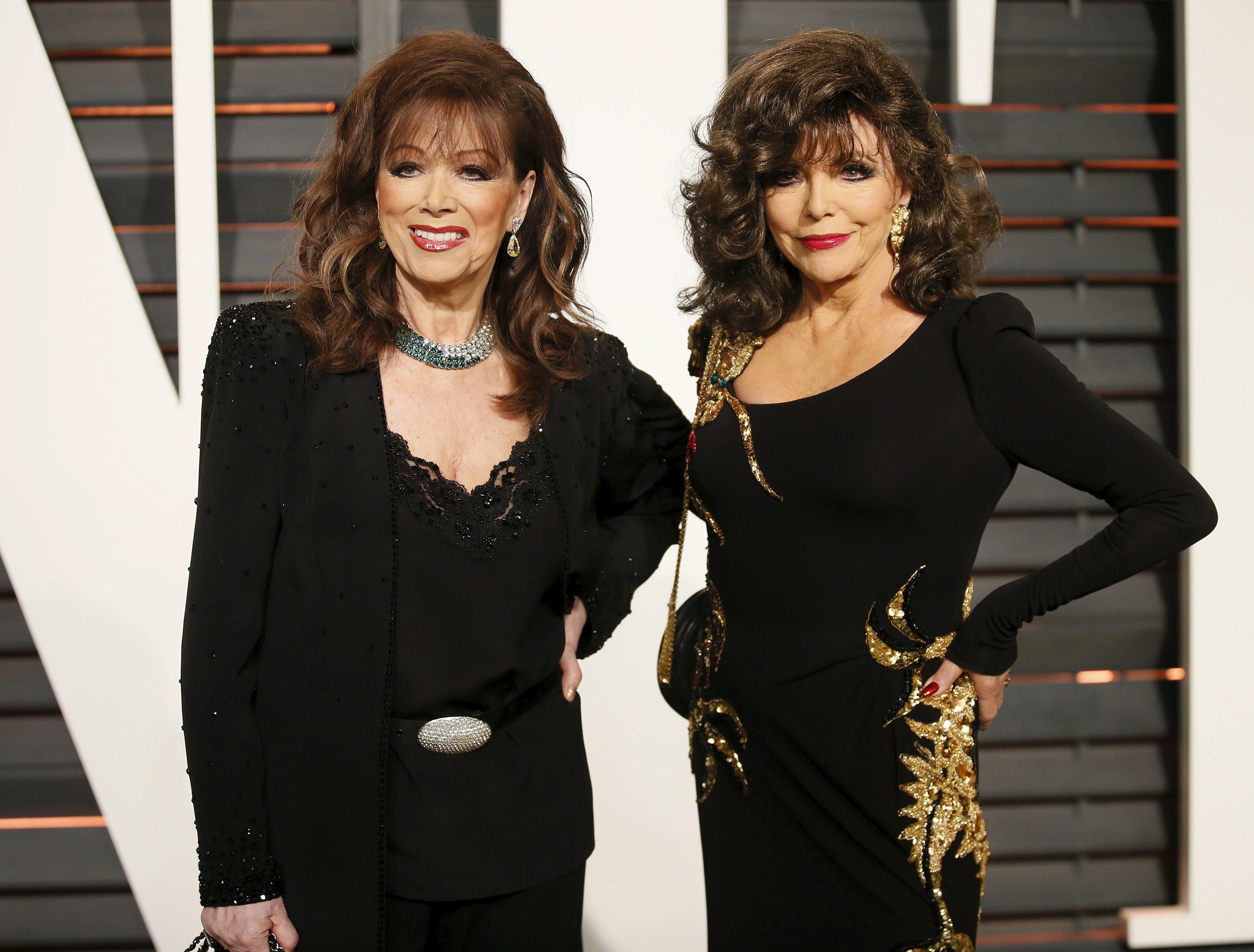 Joan revealed that a collection of stories written by Jackie when she was 11-years-old could now be published. They were discovered in exercise books when preparing for an auction of the late author's belongings.

She is also the godmother of supermodel Cara Delevingne. 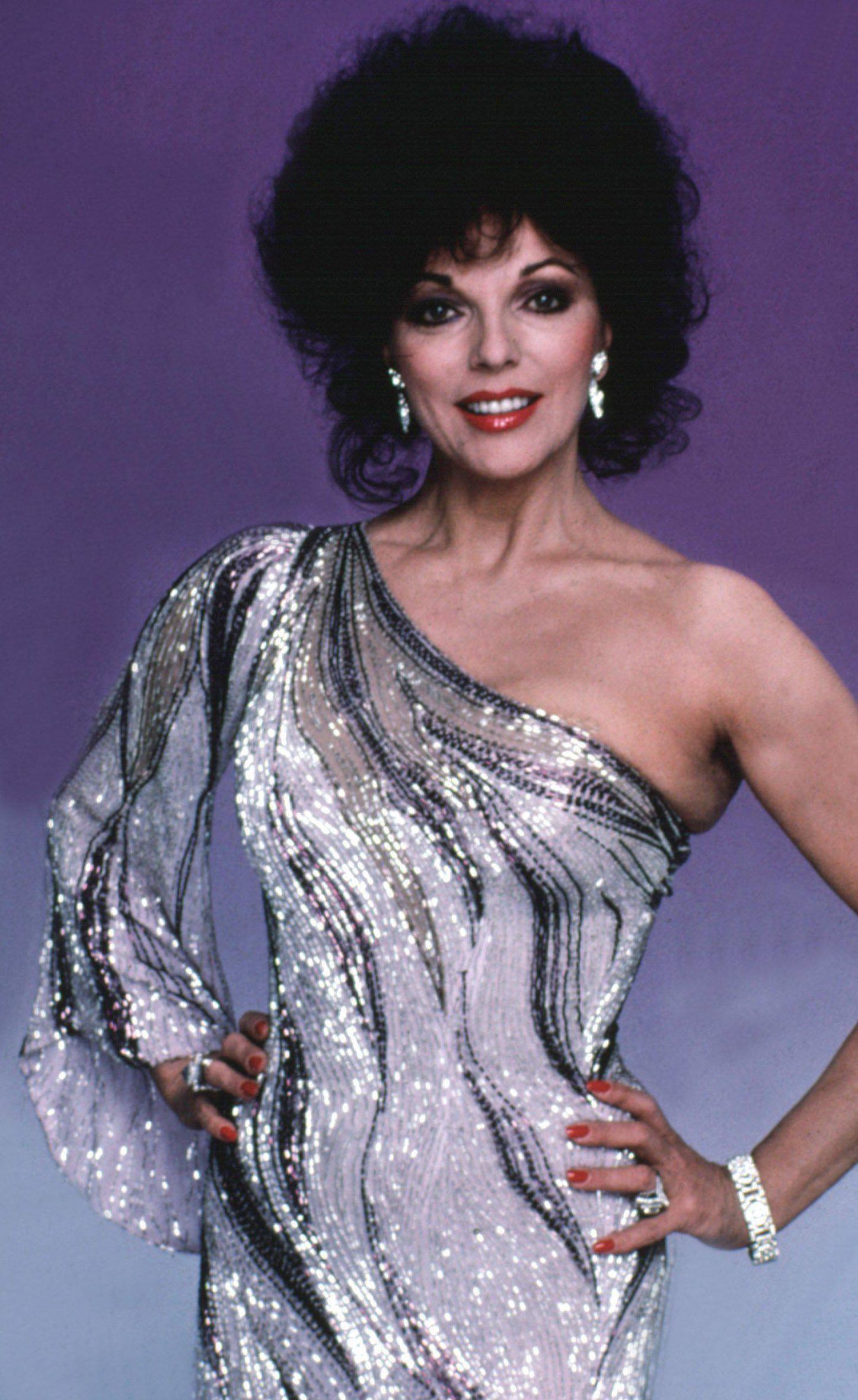 When did Joan Collins star in Dynasty and who has she played?

In 1981, Joan was offered a role in the second season of the then-struggling new soap opera Dynasty (1981–89) playing Alexis Carrington, the beautiful and vengeful ex-wife of tycoon Blake Carrington (John Forsythe).

Her performance is generally credited as one factor in the fledgling show's subsequent rise in the ratings against rival show Dallas.

Joan was nominated six times for a Golden Globe Award (every year from 1982 to 1987), winning once in 1983, the same year she was nominated for an Emmy for Best Actress in a Drama Series. 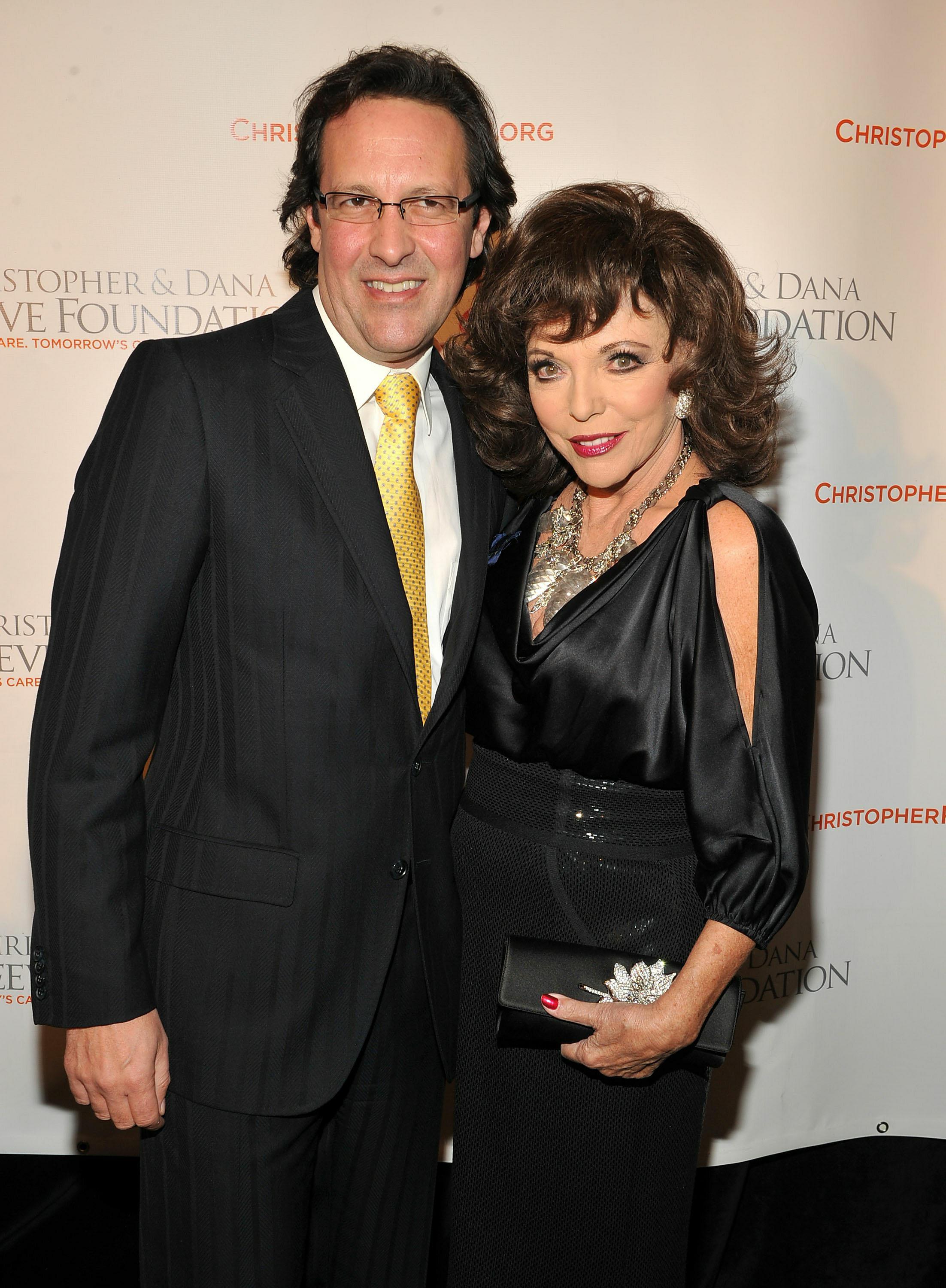 How many times has Joan Collins been married?

Joan has been married five times.

Her first wedding was to Northern Irish actor Maxwell Reed, who she married on May 24, 1952.

She then married actor and singer-songwriter Anthony Newley in 1963 and American businessman and manager Ron Kass in 1972.

She married her fifth husband Percy Gibson on February 17, 2002 at Claridge's Hotel in London.

Joan famously quipped when questioned about the age gap between her and Percy, "if he dies, he dies". 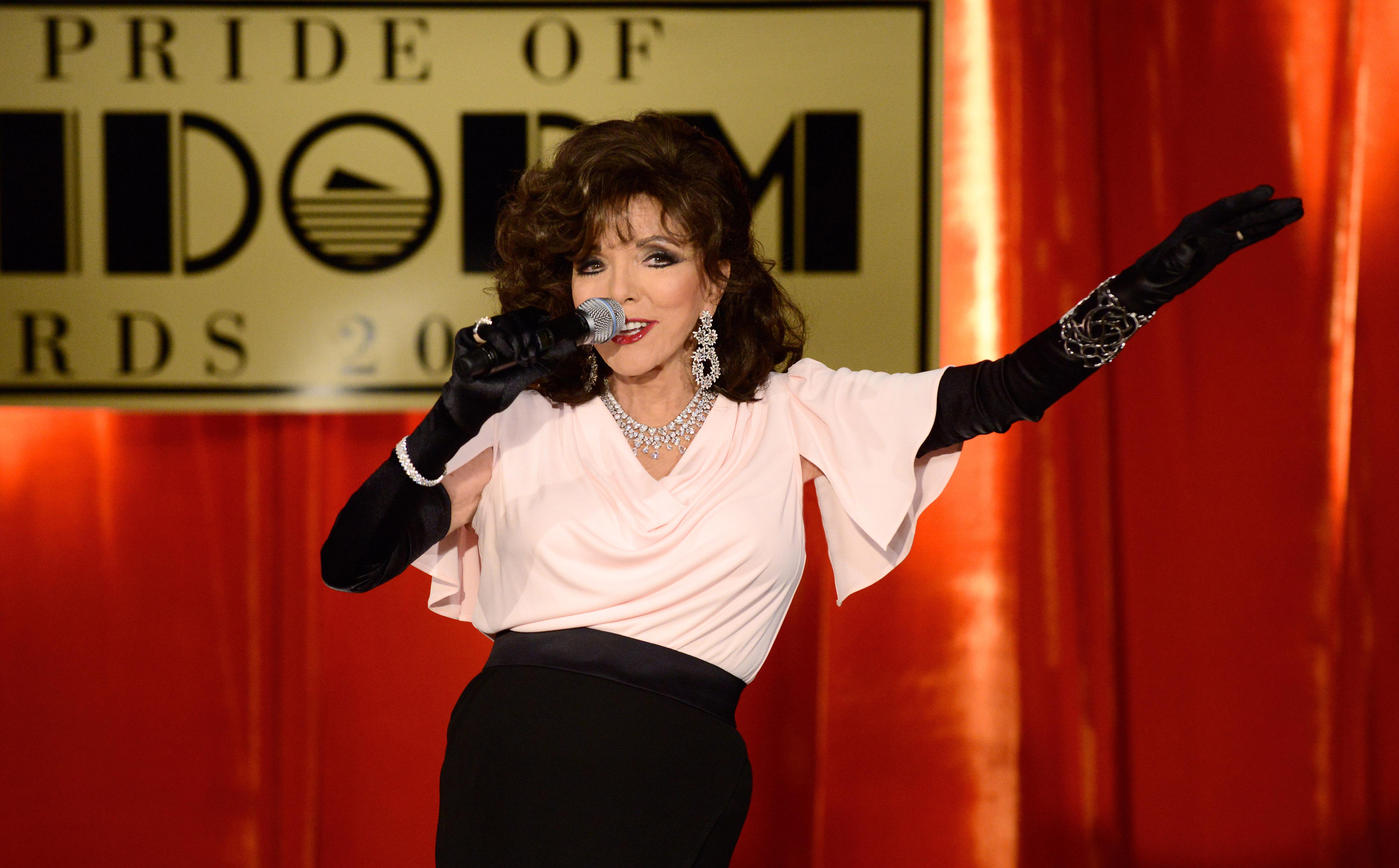 What has Joan Collins starred in recently?

Joan appeared in the movie The Time of Their Lives, which hit cinemas in March 2017 and also stars Franco Nero and Pauline Collins.

The film is a heartfelt, feel-good buddy movie in the realms of Thelma and Louise and The Best Exotic Marigold Hotel.

It's about two very different ladies – one a faded Hollywood star, the other a repressed housewife – who team up by accident, become friends and have an extraordinary adventure.

The Hollywood actress also reprised her role as Crystal Hennesey-Vaas, the CEO of the Solana Hotel Group in series nine of Benidorm on ITV.

Joan has had a recurring role in the show since 2014.

What is Joan Collins' net worth?

During her long career Collins' is rumoured to have built up a worth of over £20million.

But speaking to the Radio Times Collins said: "I'm not exactly rich, no.

What has Joan Collins said about claims made by her son that his dad, and her ex husband, Anthony Newley was a paedophile?

She said in a statement: "As far as I'm concerned this is absolutely untrue."

She told Good Morning Britain: "I think that Sacha's being extremely naive and not really knowing the meaning of that word because what Tony admittedly was, is he loved young women and young women of 17, 18, 19 years old. Not children by any means.

"Never in a million years would I have been married to somebody like that."

She added: "Categorically, I can say that it is not true, that I never saw any of that kind of behaviour from Anthony."

And Tara, 54, said: "I was shocked by my brother's comments in today's papers. From my end, I don't recognise the man he is describing. I had an incredibly close relationship with my father and am deeply upset by these false allegations."

Artist Sacha Newley, 52, made the allegations about his late father, an actor and singer-songwriter, in an interview with The Sunday Times.

In the interview he said: “He was a paedophile. My father was drawn to youthfulness.

“He thought innocence was an aphrodisiac. That was his sexual proclivity and it's a very dangerous, destructive thing.”