Home » TV & Movies » How many episodes are in Deadline on Channel 5?

How many episodes are in Deadline on Channel 5? 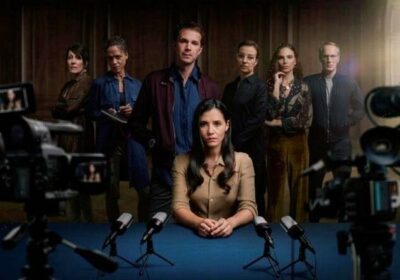 Deadline is brought to Channel 5 viewers by Clapperboard, the production company behind Sheridan Smith’s The Teacher earlier this year. This time around, it’s former Peaky Blinders star Charlie Murphy who is in the hot seat as Natalie Varga. She is accused of murdering her husband but did she really commit the crime or is everyone pointing the finger at the wrong person?

After the death of her husband, Natalie Varga (played by Charlie Murphy) is quickly accused of his murder, as she is portrayed as a cold-hearted gold digger.

James Alden (James D’Arcy) is an investigative journalist who is looking to resurrect his career and so decides to interview Natalie for his documentary.

Lines soon become blurred though as James begins to fall for Natalie, which interferes with his investigation.

Despite his feelings, James is adamant on finding out what really happened and if Natalie is telling the truth after all.

How many episodes are in Deadline on Channel 5?

Deadline will be premiering on Tuesday, April 5, at 9pm on Channel 5.

The mini-series is going to be made up of four episodes in total with fans not having to wait very long for each new instalment.

Deadline will air over four consecutive nights this week at the same time until it reaches its conclusion on Friday, April 8.

Watching the thriller on Channel 5 won’t be the only way to watch the series either.

Once a new episode comes out on Channel 5, the same instalment is going to be available to watch on its free streaming service My5.

So even if fans are unable to watch any of the four parts on the night of airing, they can catch up on Deadline via the streamer instead.

Unlike other services such as Netflix and Amazon Prime Video, viewers don’t need to pay a subscription fee for My5.

Instead, all that’s needed to gain access to its library of content is a registered email address.

She was union convener Jessie Eden who is a real-life historical figure that led all-female factory workers in Birmingham on strike over poor pay.

He has also previously starred in Broadchurch, Avengers: Endgame and Leonardo.

Speaking to What to Watch about his character in Deadline, D’Arcy said: “He’s a man in the doldrums of his career who is intrigued by this case — a very beautiful woman accused of murder.

“He gets an interview with her, and when they see each other initially, there’s something between them he can’t put his finger on.

“As they spend more time together, it becomes murkier and murkier, and we’re led into a sort of Hitchcockian thriller, where the story is constantly not quite what you thought it was, and the rug is being pulled from under your feet every 10 or 15 minutes…”

Deadline premieres on Tuesday, April 5, at 9pm on Channel 5.