How Did the 'Candyman' 1992 Horror Movie Safely Work With Real Bees? 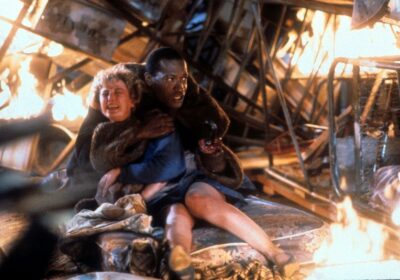 When Candyman 2021 reached theaters, horror fans couldn’t look in a mirror for a while. But the true enthusiasts already watched the original Candyman 1992 movie. Tony Todd and Virginia Madsen introduced us to a cringe-worthy sight: each bee-infested Candyman scene.

Modern CGI technology is a lifesaver. But did fans know that those bees were real in 1992? Luckily, the production crew found a safe way to work with them.

Promoted as a “spiritual sequel,” Candyman 2021 slapped theatre screens with true terror—systemic racism. Nia DaCosta, Jordan Peele, and Win Rosenfeld wrote a horror movie script but ended it with genuine fear. Twenty-seven years after the 1992 flick, Chicago’s Cabrini-Green neighborhood is different. Yet, a few old-timers remember how Candyman tore through the town.

Visual artist Anthony McCoy is seeking inspiration for a new project. When he discovers the Candyman legend, he delves too deep. Anthony awakens the spirit but uncovers the truth behind the story. Unfortunately, the truth doesn’t set him free of anything. But it unveils how society must change.

Candyman 1992 follows Helen, who becomes consumed with the legend. She discovers that a Black man in the late 1800s fell in love with a white woman. As a result, a lynch mob pursues him, cuts off his hand, and covers it with honey. The honey attracts bees, which explains the buzzworthy appearance.

Helen becomes a part of the folklore once the Candyman brings her in. At the end of Candyman 1992, viewers should recognize the infant son Candyman almost burns: Anthony McCoy.

Helen saves him, but she perishes.

How did the cast of ‘Candyman’ work with bees?

Since those bees weren’t special effects in 1992, each Candyman scene involved extensive preparation. The crew used honey bees, which typically don’t sting, and relied on pheromones to keep the actors safe. Todd had to use a dental dam to protect his throat when the bees swarmed out of his mouth.

Nevertheless, Tony Todd was stung 23 times on set. But the actor made a bonus. He reportedly asked for $1,000 per sting, resulting in a decent profit. However, his co-star wasn’t initially enthusiastic.

According to Horror News Network, Virginia Madsen revealed she was allergic to bees. But director and writer Bernard Rose doubted that.

“When Bernie [Rose] was first asking me to do the role I said, ‘Well, I can’t I’m allergic to bees.’  He said, ‘No you’re not allergic to bees you’re just afraid.’ So I had to go to UCLA and get tested because he didn’t believe [me]. I was tested of every kind of venom. I was far more allergic to wasps. So he said, ‘We’ll just [have] paramedics there, it will be fine!’

Rose instructed the cast not to swat at the honey bees. Madsen also recalled one surprising aspect: the honey bees felt furry to her.

“They felt like little Q-tips roaming around on me. Then you have [pheromones] on you, so they’re all in love with you and think you’re a giant queen. I really just had to go into this zen sort of place and the takes were very short. What took the longest was getting the bees off of us. They had this tiny “bee vacuum” which wouldn’t harm the bees. After the scene where the bees were all over my face and my head, it took both Tony and I 45 minutes just to get the bees off. That’s when it became difficult to sit still.”

How to watch both ‘Candyman’ movies

Universal Pictures didn’t give Candyman a day-and-date streaming release. But it switched Halloween Kills to a hybrid Peacock release. So fans presumed they would soon watch Candyman 2021 on Peacock as well.

However, the new Candyman is not streaming on Peacock. There hasn’t been any confirmation if it will. But the horror movie is available on-demand. Fans can rent it on Amazon Prime, YoutTube, AppleTV, Vudu, and other services.

As for the 1992 flick, brave fans can rewatch each buzzing Candyman scene for free. The original film is streaming on Tubi for free in 2021.