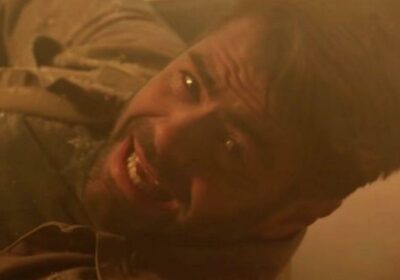 Hollyoaks Sylver McQueen star David Tag has opened up about filming his final scenes for the Channel 4 soap.

During Tuesday's dramatic hour-long episode, viewers finally got to find out what happened on the night of blaze after days of flashback episodes.

The McQueens showed just how much they stick together when Mercedes saved Cher's life.

However, tragedy struck when Sylver went back in to save Bobby and got trapped.

Bobby lied to his family and said he didn't see his step-dad in the burning building, leaving Sylver to perish in the flames. Opening up his departure from the soap, David told Daily Star: "I have actually known I was leaving for a while.

"I had a chat with producers a few months ago. I didn't know how it was going to happen but I'm really happy with the way I'm going out.

"I always said if I was to leave I wanted to go out in a bang."

David has played Sylver since 2018 and has formed a bond with his fellow McQueen family members on and off screen.

Discussing his final day of filming, the soap hunk said: "It was really emotional because we're really close.

"Me and Jen [Metcalfe, who plays Mercedes McQueen] and Beth [Hare, who plays Cher McQueen] have became a proper little family.

"Filming the episodes knowing I was leaving was quite upsetting.

"Everyone is so lovely to work with so it was an emotional time."

He went on to share what he's going to miss most after leaving the show.

He added: "Chelsee [Healey, who plays Goldie McQueen] was my sister so I'm protective her on and off set.

"You develop these relationships where you can't get them anywhere else apart from being on set.

"It's going to hit Mercedes and Cher hard and I'm excited to see what the funeral is like.

"It's not often you get to watch your own funeral."

Fans will have to wait if Mercedes and the rest of the McQueen family will find out about Bobby's evil lie which caused Sylver's death.

Hollyoaks airs weekdays on Channel 4 at 6.30pm followed by first look episode on E4 at 7pm