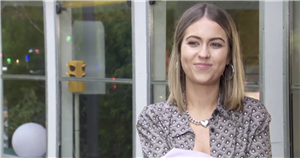 The actress has been captivating audiences as the twisted cupcake maker for the past 12 months.

From kidnapping Liberty Savage (Jessamy Stoddart) to having an affair with her fiancé Brody Hudson's (Adam Woodward) ex Sienna Blake (Anna Passey), Summer has certainly made an impact in the village.

However, Rhiannon has confirmed that her Hollyoaks contact has come to an end and Summer's final scenes will play out near future.

Speaking to Daily Star, the soap star said: "Summer has been really fun to play.

"I found it tricky to pitch it at times because the audience were in on so much but none of the characters knew. They just thought she was this sweet person for a while.

"The door has been left open so never say never. My contract was only 12 months so I've finished now."

Fans of the Channel 4 soap are aware that Sienna is convinced that Summer killed her beloved Brody Hudson in a dramatic hit and run incident, so much so that she lied to the police about seeing her do it.

Warren Fox (Jamies Lomas) has since been exposed to being the driver behind the wheel of the vehicle but is yet to come forward.

Opening up about the dramatic storyline Rhiannon said: "The twist took me massively by surprise. I was convinced the whole way through that Summer would get her revenge on Brody.

"I was completely shocked by it but I'm glad Summer didn't kill him. She's made his life hell anyway.

"As much as she wanted revenge for her dad, there was a much bigger picture.

"For her not to go through with it is good because she can take time and work through her demons in prison."

Rhiannon was recently nominated for the Best Newcomer gong at the National Television Awards and got the chance to walk the red carpet for the first time.

Despite rubbing shoulders with some of the biggest names in showbiz, the TV personality admitted that meeting Hollyoaks fans was the highlight of the night.

"I was terrified because I'd never done a red carpet before," she confessed.

"There were loads of Hollyoaks fans there so I got to chat with them.

"It was so lovely to meet people who have been supportive of me and the character over the last 12 months, that was probably my favourite bit.

"It was a nice way to say farewell to the last year, and to end it with all the guys from Hollyoaks was brilliant."

Hollyoaks airs weekdays on Channel 4 at 6.30pm followed by a first look episode on E4 at 7pm