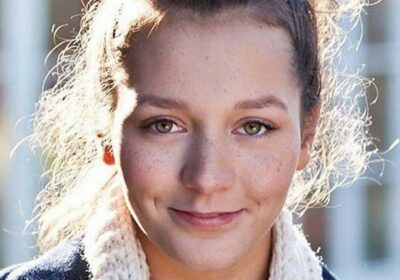 Hollyoaks star Nadine Mulkerrin has announced that she has left the Channel 4 soap after seven years on the show.

The 28-year-old actress first joined the soap back in 2015 and has gone on to perform in some emotionally driven storylines such as her anorexia storyline in the lead up to her wedding day with her onscreen husband Joel Dexter (played by her fiancé Rory Douglas-Speed).

And her TV exit was set into motion last week when she received word from Mosbah Maalik (Harvey Virdi) that she’d been offered the chance to take part in a research project in India.

It was an opportunity that the Dee Valley Hospital nurse had longed for in recent years but was anxious about packing up her life and leaving the village behind.

Now she has taken to Instagram to thank her loyal legion of fans on social media for their continued support as she prepares to welcome her second child later on this year.

Alongside a picture of her first and last day in the village, she shared a lengthy caption as she announced her latest career move with her loyal legion of fans online.

She penned: “My Hollyoaks chapter has closed, I have officially left the village! I just want to say a huge thank you to no. 1 to Mr Bryan Kirkwood who cast me as Cleo McQueen back in 2015 and changed my life forever.

“I have truly had the best years of my life working on Hollyoaks. I’ve been blessed with incredible storylines that have challenged me as an actor, whilst also meeting some of my life long friends and having an absolute ball together inside and outside of work!”

The actress went on to meet and work across from her future husband who are set to tie the knot after the arrival of their second child together.

She added: “I met my future husband to be and now I have two kids!! I’m so grateful for everything this job has given me, it’s not often you get stability and comfort in this line of work.

“Thank you to all the amazing Hollyoaks fans that have championed Cleo McQueen you guys are the best! And my Lime Pictures family from every single department I love you all so much! See you on the other sideeeeeee.”

Nadine was soon flooded with a slew of congratulatory comments from her co-stars and loyal fanbase on social media.

Stephanie Waring wrote: “Goodbye Nadine and Cleo wishing you so muck luck and love for whatever the future holds [heart emoji].”

Emily Burnett added: “What a gorgeous human. It was a complete honour and a privilege! Go set the world alight mrs! [three praise emojis].”

A third chimed in with: “@nadinemulkerrin I remember you telling me you got the job like it was yesterday and I’m still a loyal hollyoaks viewer! Wishing you all the luck in your next venture! And baby no2 [heart emoji].”