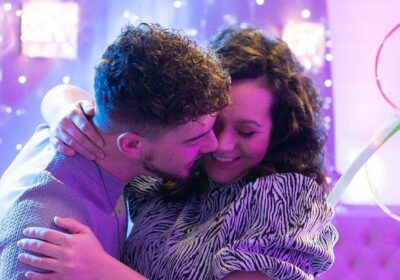 Multiple Hollyoaks residents find their lives in danger next week.

A night out with Verity Hutchinson (Eva O'Hara) and her friends stirs some feelings in for her brother Eric (Angus Castle-Doughty) as he struggles to find his place in the village.

Hopes for Eric and Cleo McQueen (Nadine Rose Mulkerrin) are shattered when he sees a spicy text from her on-off lover Joel Dexter (Rory Douglas-Speed) on her phone.

Later, at The Loft, Eric makes a desperate attempt to come out on top and resorts to extreme measures to wipe out the competition.

Also, Zoe Anderson ( Garcia Brown) celebrates her birthday at The Loft, but even whilst surrounded by all her friends, her mind wanders to Sam Chen-Williams (Matthew McGivern) and she makes a drunken phone call.

The group of friends’ wild night out catches up with them in the form of hangovers and in Cleo’s case, a missing boyfriend.

Meanwhile, Eric tries to hide his involvement in Joel’s absence by implying he saw him leave with another woman, but how long will the truth stay hidden.

Memories of the night before rush back to Zoe and she hurries to delete her embarrassing voicemail from Sam’s phone. Later, she and Sam make a change to their relationship.

Eric begins to question what the world is really like underneath the surface and by the end, he makes a solemn conclusion.

Also, a harsh warning from Joel to stay away from Cleo triggers him to start making amend.

Worried about Eric’s recent behaviour, Verity decides to rent the McQueen's caravan on Eric’s behalf so he can have his own space.

Joel’s guilt forces him to act impulsively again and he makes a shocking decision about rekindling his relationship with Cleo.

Settling into his new home, Eric locks himself in and vents his frustrations in writing but he’s forced to The Dog by Verity when she invites him for a drink with her and Cleo.

Trying to get out of it, Eric invites Joel to The Dog at the same time, but what does he have up his sleeve?

Later, a concerned Verity puts her foot in it even as she suggests Eric might turn out like their evil dad, Edward Hutchinson.

Elsewhere, there’s hope for Mercedes McQueen (Jennifer Metcalfe) as she finds out her son Bobby Costello (Jakob Chialton) will be visiting the village to get his favourite comic, but will she get the chance to talk to him?

Trying to push forward with their relationship, Maxine Minniver (Nikki Sanderson) asks Warren Fox (Jamie Lomas) to move in with her, but Warren isn’t sure that is what he wants anymore.

Hollyoaks airs weeknights on Channel 4 at 6.30pm followed by first look episodes on E4 at 7pm