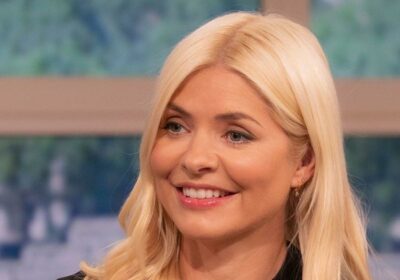 This Morning presenter Holly Willoughby will not quit her role on the ITV show, according to a programme insider.

The 41 year old recently received harsh criticism from fans after she and her co-host Phillip Schofield, 60, were accused of queue jumping to view the body of Queen Elizabeth II lying in state on Friday (Sept 16) .

Thousands of mourners were left outraged by the TV stars after they appeared to use their celebrity influence to skip to the front of the line bypassing those who waited 14 hours to see the late monarch in her coffin.

READ MORE: This Morning's Holly and Phil break silence over 'queue-jump' – but viewers are still not happy

Following the backlash, a close source has now told The Sun that Holly's position on the popular daytime show still remains safe.

The insider said: "Holly will not quit.

"She has been devastated by all the negative reaction after she turned up to work at Westminster Hall with Phil on Friday, but she's not going to resign.

"This Morning has been her life for more than a decade and the only way she'd consider quitting at this stage is if viewers really didn't want her there."

The insider also shared that they are confident that Holly is still a hit with viewers and she has now addressed what actually took place while appearing alongside Phil on This Morning.

During Tuesday's episode of This Morning, Phil and Holly spoke candidly on what happened while insisting that they would "never skip a queue".

As they opened the show, a clip from inside the Westminster Hall was shown to viewers at home. The clip did not show Holly and Phil as they walked past the monarch's coffin.

While the footage was being played, Holly said: "Like hundreds of accredited broadcasters and journalists we were given official permission to access the hall.

"It was strictly for the purpose of reporting on the event for millions of people in the UK who haven’t been able to visit Westminster in person."

She continued: "The rules were that we would be quickly escorted around the edges to a platform at the back. In contrast those paying respects walked along a carpeted area beside the coffin and were given time to pause.

"None of the broadcasters and journalists took anyone's places in the queue and no one filed past the Queen.

"We of course respected those rules however we realised that it may have looked like something else and therefore we totally understand the reaction.

"Please know that we would never jump a queue," she explained.

Phil also reflected on his time seeing the monarch lying in state and said: "That's got to be one of the most profound moments of my life."