Holly Willoughby tells off Phillip Schofield over This Morning slip-up 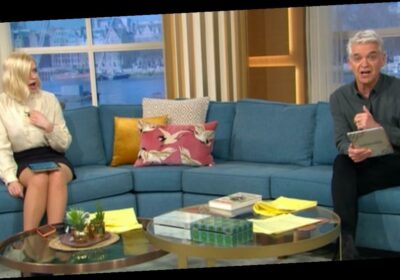 This Morning's Phillip Schofield received a telling off from his co-star Holly Willoughby during Wednesday's edition of the ITV daytime show.

The presenting duo were on hand to give viewers at home the chance to get their hands on a cash prize.

They drafted in fan favourite Alison Hammond to play Dosh on your Doorstep and she was taken to a secret location to present the segment.

Throughout the show, Holly and Phillip had to guess where she was but Phillip accidentally spoiled the game.

Following a break, the hosts were informing viewers of what was coming up on the show and they spoke to Alison, 46, to give them another clue about where she was.

Earlier in the programme, the former Big Brother housemate had been spotted in a forest but she had made her way to a football pitch by the time she spoke to Holly and Phillip again.

They were given some indication the location was up north and began reeling off the names of a number of cities.

Holly and Phillip asked bosses in the gallery to help them out and it seems Phillip misunderstood what he was told as he accidentally revealed Alison was in Sheffield.

Holly, 40, told her colleague: "You’re not allowed to say that."

The presenters swiftly tried to rectify the slip-up as they explained it “could be” Sheffield where Alison was.

Holly put her hand to her mouth as she couldn’t believe Phillip, 58, had given the game away before he said: "In which case, we will leave it there."

"We can’t say anymore,” Holly remarked as the presenters continued with the rest of the show.

Later on in the programme, Alison had to knock on the door of viewer Callum as she gave him a chance to play for £1,000.

The lucky contestant managed to win the cash prize and fans quickly picked up on his chemistry with Alison.

One fan gushed: "Can we petition for Callum to join Alison on the Friday slot, that was funny. He’s cool."

Another added: "Alison proper fancies him."

A third person posted: "I'm going to re-watch Callum on catch up. What a top guy!! Proper made me smile!"

There was another unfortunate error that happened earlier on in the programme when Holly and Phillip tried to speak with a guest.

Chef Nisha Katona was scheduled to give a cooking demonstration and at the top of the show but a sound issue caused some trouble.

For a couple of moments, the trio tried to workout whose microphone was causing the problems with Phillip asking the production team who it was.

Holly added: "Go and change it and we'll speak to you later,” before the camera cut on the chef."

However, Phillip and Holly carried on like true professionals.

This Morning airs weekdays on ITV at 10am