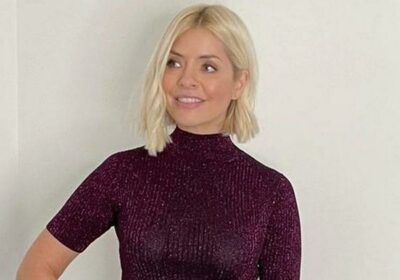 This Morning star Holly Willoughby has ruffled her fans' feathers by posting a picture advertising a rather expensive sparkly skirt.

The TV presenter looked amazing in her latest Instagram snap but come under fire for promoting a rather pricey look.

Fans flocked to comment on her outfit but pointed out the price of her jaw-dropping skirt.

One fan said: "Love the skirt and top I would of worn this to Christmas part not at the price though shame there isn't affordable prices"

While another said: "Love the skirt just a shame about the £265 price tag"

However, some were just there to let Holly know how lovely she looked, by saying: "Love this outfit Holly"

Another fan typed: "You put the sparkle in life, stunning!"

This comes after things took a slightly awkward turn on Monday's episode of This Morning after comedian Brendan O'Carroll appeared to suggest that Holly Willoughby's husband needed cream.

The Mrs Brown's Boys actor appeared on the show alongside his wife and co-star Jennifer Gibney to discuss their popular show during the festive season.

However, host Holly couldn't help but hide her amusement when actor Brendan said her husband "should keep using the cream".

Presenter Phillip Schofield chimed in to say: "I'm buying some more for him at Christmas actually."

Later in the interview, Brendan and Jennifer discussed their "scary" live episode for Halloween which aired in October.

When presenter Phillip asked whether it was actually hard to film the live episode, Brendan quickly agreed that it was.

He then went on to speak about the character Winnie McGoogan getting her lines wrong during the live production.

Philip asked: "So how did Winnie mess up?"

Laughing slightly, Brendan answered: "She said that sex was a pain in the butt and the line was supposed to be sex is overrated."

"I told her 'you can't say that Winnie because if you say that I'm going to have to tell you that you said it wrong.'"