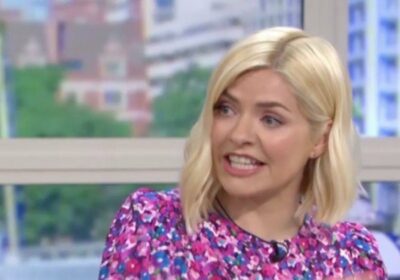 Worried Holly Willoughby gave Gok Wan the boot after he joked that he’d “wet himself” live on air.

The ITV beauty demanded the fashion guru “get out of the kitchen” after a different kind of spillage altogether.

Holly and Phillip Schofield were detailing what was coming up on This Morning where a leak suddenly appeared.

In the background, Gok could be heard making a strange moaning sound from his position in the studio kitchen.

Talented Gok was teasing viewers with the dish he would be preparing later on.

“Gok, are you alright?” bemused Holly asked her pal as the noises could be heard.

“Are you burping or are you singing?”

Shocked Holly bit back: “Get out of the kitchen!”

The odd noises could be easily explained.

Holly and Phillip later welcomed the guest with the Guinness World Record for the lowest vocal note sung by a female.

“Hearing is believing so we’re going to hand over to you now and you’re going to show us exactly why you have this record,” Holly said.

Joy Chapman demonstrated her skills before being asked by the hosts all about her unusual singing voice.

Phillip asked: “With something like this, is this something you develop or a talent you have?”

Joy replied: “It’s something the doctor figured I have what’s called hyper-mobility syndrome.

“So that allows my body to move in ways that normal people can’t so my vocal larynx can go further down into my chest lower than most humans.”

Then Phillip said: “The fact you can do this and you’ve got the Guinness World Record, you’re now attempting to do the range world record."