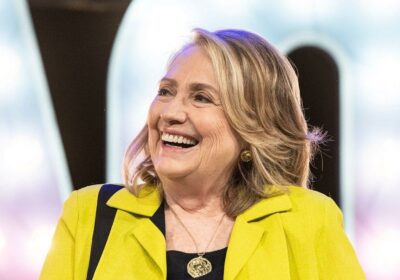 Hillary and Chelsea Clinton have unveiled their new docu-series.

The former First Lady and her activist daughter are the faces of the new Apple TV+ show, Gutsy, which is set to premiere on the streaming service on September 9th.

The series is set to feature Hillary and Chelsea as they interview a their own ‘personal heroines’ which feature whole range of famous faces from the worlds of pop culture and politics.

READ MORE: Vladimir Putin accused of 'manspreading' in front of the press by Hillary Clinton

The new series is confirmed to feature the likes of Kim Kardashian, Megan The Stallion, Goldie Hawn and Kate Hudson amongst a string of other famous stars and activists.

Hillary took to social media to share a promotional picture for the series as she gave a hint of just a few of the names involved alongside the start date of when the series will drop on the subscription based platform.

The picture showed the former Politician and her daughter smiling and they relax in a red car as she captioned her Instagram post: We've got a premiere date! "Gutsy," our new eight-episode documentary series, will premiere on @appletvplus on September 9.

She continued: “Set your calendars to join Chelsea and me for intimate conversations about life, careers, and courage with some of our personal heroines, favorite pioneering women, and fellow mother-daughter duos.”

Hillary added: “We talked to Gloria Steinem, Jane Goodall, Kim Kardashian, Megan Thee Stallion, Goldie Hawn, and Kate Hudson—plus many more artists, activists, and community leaders. We can't wait to have you join this conversation with us.”

The new docu-series is based on the book that the former New York Senator and the former first-daughter Chelsea wrote together, The Book Of Gutsy Women.

Subjects in the book included early inspirations like Harriet Tubman, Helen Keller and Anne Frank to healers like Florence Nightingale.

Environmental activist Greta Thunberg is included as well as ground-breaking women in the world of sport and pop culture including Billy Jean King, Serena & Venus Williams as well as TV host Ellen DeGeneres.

Apple TV+ released a statement on the upcoming series where they claim the the duo will “embark on a thought-provoking journey to speak with pioneering women,” some of whom are 'personal heroes' of the Clinton’s.

The series promises to show Hillary and Chelsea “as you've never seen them before” as they show off their unique bond as they tackle topical issues.

It’s been reported that former President Bill Clinton will not be making any appearances in the series.

The announcement comes as Frieda Pinto was announced to play long-time advisor, Huma Abedin, in a new television series.

The former Clinton aide published her memoir in 2021, Both/And: A Life in Many Worlds and the Slumdog Millionaire actress is set to portray the American political staffer in a new TV adaptation of her book.