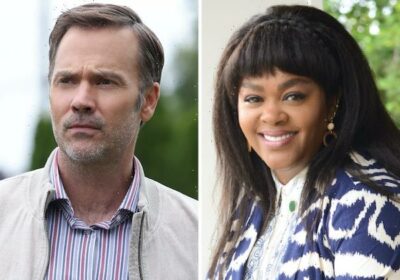 Grammy winner Jill Scott and 7th Heaven alum Barry Watson are set to star in a TV-movie series reboot of Highway to Heaven, the 1980s drama that famously starred Michael Landon as a helpful angel.

Scott will star as Angela, an angel who comes down to Earth to help people in crisis, while Watson will play Bruce, a junior high school principal who becomes aware of Angela’s true identity.

In the first of what will be multiple movies, Angela assumes the role of a temporary school counselor and finds herself working alongside the principal, Bruce, as she intervenes in the lives of a troubled student Cody (played by The Astronauts’ Ben Daon) and his father Jeff (Riverdale‘s Robert Moloney) after the tragic loss of Cody’s mother, Melissa (A Series of Unfortunate Events’ Ashley Ross). “As Angela seemingly works miracles with Cody and Jeff, Bruce is in disbelief when he learns of the divine nature of Angela’s work,” reads the official description.

“The original Highway to Heaven was appointment viewing for millions and in a time when we need those messages of hope the most,” Lifetime’s Tanya Lopez, EVP of scripted programming, in a statement. “Having worked with Jill previously for some of Lifetime’s most celebrated movies, we know she is the perfect actor to bring her passion and brilliance to this role… And the addition of Barry was just icing on the cake.”

The original series starred Landon in the role of angel Jonathan, who was sent to Earth to help people in need. The drama ran for five seasons on NBC and produced more than 100 episodes from 1984-89. The reboot aims to continue its themes of love and kindness, while addressing contemporary social and emotional issues pertinent to a modern-day audience.

Scott (who can currently be seen as Hazel in BET+’s The First Wives Club) previously starred in Lifetime’s Emmy-nominated Flint, in addition to the all-Black reboot of Steel Magnolias and Sins of the Mother. Watson also has roots at the network, having previously starred in A Very Nutty Christmas and The Santa Con.

Looking forward to this new version of Highway to Heaven? Drop your thoughts in the Comments below!