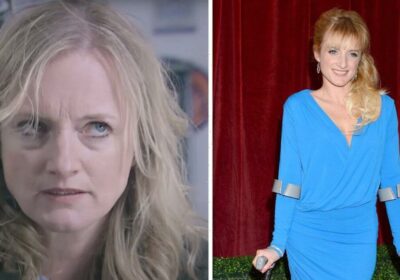 Emmerdale village continues to deal with the fallout from the life-changing storm featured in the 50th anniversary special. However, life carries on with plenty of scheming and double-dealing between the residents in the Yorkshire Dales-set soap. This week will see Nicola King (played by Nicola Wheeler) taking centre-stage as her mugging and assault case goes to court and she takes to the stand. Many viewers may be curious to discover more about actress Wheeler when she isn’t filming on the long-running ITV series.

Does Nicola Wheeler have children?

Actress Wheeler has been part of Emmerdale for 20 years after first appearing as Nicola back in 2001.

Since then, her character has had some explosive storylines including getting trapped in a fire at Mill Cottage and suffering a brain injury in the accident.

Her character has been in a long-term relationship with Jimmy King (Nick Miles) and the couple welcomed their daughter Angelica King (Rebecca Bakes) in 2009.

Along with Anjelica, Nicola serves as a mother figure to Jimmy’s other children Elliot Windsor (Luca Hoyle) and Carl Holliday (Charlie Munro Joyce).

In the soap, Nicola also suffered a miscarriage which left her devastated and she even moved to Dubai temporarily as she sought to deal with the heartbreaking loss.

Away from Emmerdale, soap star Wheeler has one child, son Jude whom she gave birth to in 2015.

She only confirmed she was expecting back in February of the same year, posting on Twitter: “Thanks for all your congratulations.”

She added: “Still got a couple of weeks until baby arrives. Unless he/she gets impatient.”

After Wheeler gave birth, the official Emmerdale Twitter account posted about the new arrival at the time, writing: “BIG congratulations to @nicola_wheeler and her baby boy, who arrived on Friday 13! #Emmerdale.”

Wheeler’s maternity leave from the show was explained through the character going to jail.

Prior to going off on maternity leave, Wheeler had to cover up her growing baby bump.

“Everyone is very happy for Nicola, it is wonderful news for her and her partner,” an Emmerdale insider told The Sun.

They continued: “But hiding her bump has presented a real challenge and the team have had to be very clever in keeping it under wraps.”

Adding: “They also needed to explain Nicola’s absence in a way that was in keeping with her character’s story – which is the complete opposite to hers.

“But the bosses are happy with the storyline the writers have come up with and hope viewers feel the same.”

Wheeler is generally quite a private person and has a Twitter account from which she mostly posts about her work on Emmerdale.

Most recently, the star posted to her 105,000 followers: “Who will get justice? Nicola, Naomi or neither? Who will the jury believe?”

She also shared an update from the Emmerdale account teasing the star of Nicola’s trial and who the jury will believe.

However, what should be a cut-and-dried case is going to be complicated as Naomi Anderson (Karen Peter) may not face justice.

Nicola continues to suffer from trauma in the aftermath of the attack in which she was targeted in a car park by a group of young women.

She also ended up in hospital but initially said she couldn’t remember anything from the assault.

Naomi’s layer will be arguing the case against the woman is lacking in evidence and so she could get off.