Here Are All of Netflix's 2020 Original Holiday Movies, TV Series and Specials From “Dash & Lily” to “The Princess Switch: Switched Again” 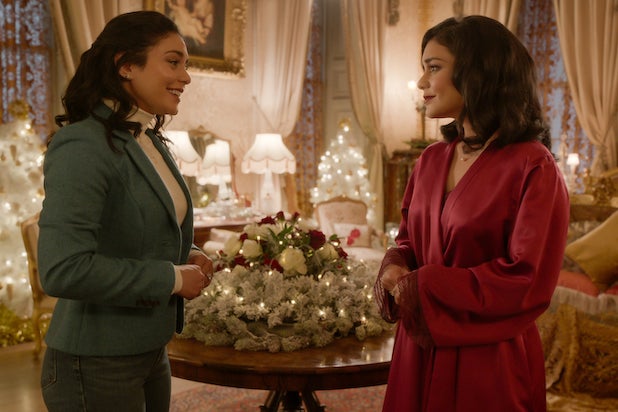 See the full schedule below.

“Holidate” – Oct. 28
Sloane (Emma Roberts) and Jackson (Luke Bracey) hate the holidays. They constantly find themselves single, sitting at the kids table, or stuck with awkward dates. But when these two strangers meet one particularly bad Christmas, they make a pact to be each other’s “holidate” for every festive occasion throughout the next year. With a mutual disdain for the holidays, and assuring themselves that they have no romantic interest in the other, they make the perfect team. However, as a year of absurd celebrations come to an end, Sloane and Jackson find that sharing everything they hate may just prove to be something they unexpectedly love.

“Operation Christmas Drop: – Nov. 5
Chasing a promotion, congressional aide Erica Miller forgoes family Christmas to travel across the Pacific at her boss’s behest. Upon landing at a beachside Air Force base, she clashes with her guide, Captain Andrew Jantz, who knows her assignment is finding reasons to defund the facility. The pilot’s pet project — Operation: Christmas Drop, a genuine, decades-old tradition where gifts and supplies are parachuted to residents of remote neighboring islands — has lawmakers wondering if his unit has too much spare energy. Despite their initial opposing goals, Erica softens once she experiences the customs and communal spirit of Andrew’s adopted home.

“Jingle Jangle: A Christmas Journey” – Nov. 13
A musical adventure and a visual spectacle for the ages, Jingle Jangle: A Christmas Journey is a wholly fresh and spirited family holiday event. Set in the gloriously vibrant town of Cobbleton, the film follows legendary toymaker Jeronicus Jangle (Academy Award winner Forest Whitaker) whose fanciful inventions burst with whimsy and wonder. But when his trusted apprentice (Emmy winner Keegan-Michael Key) steals his most prized creation, it’s up to his equally bright and inventive granddaughter (newcomer Madalen Mills) — and a long-forgotten invention — to heal old wounds and reawaken the magic within. From the imagination of writer-director David E. Talbert and featuring original songs by John Legend, Philip Lawrence, Davy Nathan, and “This Day” performed by Usher and Kiana Ledé, Jingle Jangle: A Christmas Journey reminds us of the strength of family and the power of possibility.

“The Princess Switch: Switched Again” – Nov. 19
When Duchess Margaret unexpectedly inherits the throne to Montenaro and hits a rough patch with boyfriend Kevin, it’s up to her double Princess Stacy of Belgravia to get these star-crossed lovers back together… but the course of true love is complicated by the appearance of a handsome royal who’s intent on stealing Margaret’s heart. Throw in the unexpected arrival of Margaret’s outrageous party girl cousin Fiona, a third look-alike who has ambitions of her own, and you have the recipe for Christmas triple trouble!

“Dolly Parton’s Christmas on the Square” – Nov. 22
A rich and nasty woman, Regina Fuller, returns to her small hometown after her father’s death to evict everyone and sell the land to a mall developer – right before Christmas. However, after listening to stories of the local townsfolk, reconnecting with an old love, and accepting the guidance of an actual angel, Regina starts to have a change of heart. This is the story about family, love and how a small town’s Christmas spirit can warm the coldest of hearts. Featuring 14 original songs with music and lyrics by Dolly Parton.

“The Christmas Chronicles: Part Two” – Nov. 25
It’s been two years since siblings Kate (Darby Camp) and Teddy Pierce (Judah Lewis) saved Christmas, and a lot has changed. Kate, now a cynical teenager, is reluctantly spending Christmas in Cancun with her mom’s new boyfriend and his son Jack (Jahzir Bruno). Unwilling to accept this new version of her family, Kate decides to run away. But when a mysterious, magical troublemaker named Belsnickel threatens to destroy the North Pole and end Christmas for good, Kate and Jack are unexpectedly pulled into a new adventure with Santa Claus (Kurt Russell). Written and directed by Chris Columbus (Home Alone, Harry Potter) and co-starring Goldie Hawn, THE CHRISTMAS CHRONICLES 2 is an action-packed adventure for the whole family that’s full of heart, humor, and holiday spirit.

“Tudo Bem No Natal Que Vem” / “Just Another Christmas” – Dec. 3
After taking a very nasty fall on Christmas Eve, grinchy Jorge blacks out and wakes up one year later, with no memory of the year that has passed. He soon realizes that he’s doomed to keep waking up on Christmas Eve after Christmas Eve, having to deal with the aftermath of what his other self has done the other 364 days of the year.