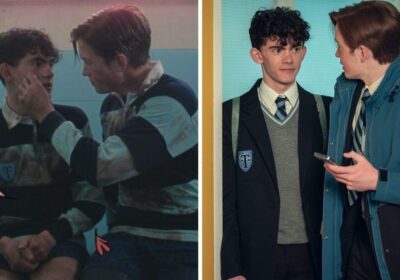 The Netflix series, which is based on a graphic novel by Alice Oseman, follows the teenage romance between students Nick Nelson (played by Kit Connor) and Charlie Spring (Joe Locke). The eight-episode series, which promised plenty of emotional moments as the Grammar school students fall in love, didn’t disappoint as many fans have admitted to balling their eyes out.

It has since been revealed that the Netflix hit has received a top score of 100 per cent by movie critic website Rotten Tomatoes.

The teen drama received a score of 100 per cent on the Tomatometer overall and an audience score of 99 per cent.

Kit and Joe’s characters may be at the centre of the storyline, but they are also joined by cast members William Gao as Tao Xu, Yasmin Finney as Elle Argent and Corinna Brown as Tara Jones.

The series begins with Charlie, who is openly gay in the original webcomic, as he goes on to meet Nick at school.

He instantly falls for the rugby star but is convinced Nick wouldn’t feel the same about him.

However, Nick likes Charlie more than he realises, and the duo eventually come clean about their true feelings.

However, their romance isn’t easy as they face a number of challenges along the way.

Following the launch of Heartstopper, viewers have taken to social media to share their thoughts, and many have admitted to shedding a tear or two.

Others have praised the series’ creators for sharing such an amazing story.

User @cybulatao wrote: “Who else is with me crying 10 minutes before the #Heartstopper episode 8 ending and still crying after it ended?! who’s cutting onions?!!!!” (sic)

While user @nils_sjoberg13 added: “Somehow got hooked and finished #Heartstopper in a couple of hours… and wow, it was so good! Such a feel-good show and now I’m genuinely crying at the end.”

“Nah #Heartstopper got me ugly crying. The show I wish I had growing up,” Victoria tweeted.

J went on to comment: “I know it’s weird for a man in his 20s crying from watching a series about high schoolers, but this is what I’ve always dreamed of my whole life. what i always wanted in my teenage years.” (sic)

Heartstopper author Alice was also heavily involved in the making of the Netflix series.

However, in order to ensure the story was told within eight episodes, she had to make the drastic decision of cutting some important elements.

“Imogen was a big part of that, adding a little bit of drama and tension kind of part way through the story,” she explained.

She added to Digital Spy: “And Isaac is a little bit of that, but, for various complicated reasons, I had to take a character called Aled out of the books. And Isaac is kind of there to fulfil the role of him.”

Heartstopper is available to watch on Netflix.