'Hawkeye': 3 Marvel Movies to Rewatch Before the Disney+ Show Arrives 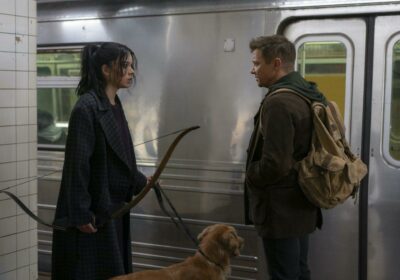 Hawkeye premieres on Disney+ in November, and the Marvel show promises to connect the franchise’s past and future. Clint Barton’s (Jeremy Renner) latest adventure is a direct result of his past actions in the Marvel Cinematic Universe. For that reason, fans might want to revisit some of Marvel Studios’ earlier stories in order to prepare. Which Marvel movies should they rewatch?

With Hawkeye arriving on Nov. 24, there’s not a ton of time for Marvel fans to catch up on all the movies and shows that might prove relevant to Clint Barton’s latest predicament. The Disney+ series will see his actions as Ronin in Avengers: Endgame coming back to haunt him in a big way. He’s attracted the wrath of a few mob bosses, and he’ll have to deal with them before returning to his family for Christmas.

Fortunately, he’ll have Kate Bishop (Hailee Steinfeld) on his side. Another skilled archer, Kate promises to take up Hawkeye’s mantle when he’s done with the Avengers. She’ll also help him confront his demons — even if the archer would rather go it alone.

And while preparing for Hawkeye to arrive, fans may want to reacquaint themselves with the character and his past. The best place to start is probably Avengers: Endgame.

‘Avengers: Endgame’ will have a huge impact on ‘Hawkeye’

The events of Avengers: Endgame are likely to hang over Marvel’s Hawkeye, with the show exploring the consequences of Clint’s actions in the film. Following the Blip, Clint began enacting revenge on those who survived instead of his family — namely, those with criminal backgrounds who “didn’t deserve” to exist if his wife and kids didn’t.

Of course, many of the people Clint went after were mobsters and gang members. Their colleagues will try to avenge them in the Disney+ series, and rewatching Avengers: Endgame will remind viewers of why they want Clint dead.

And that’s not the only reason Avengers: Endgame is likely to play an important role in Hawkeye. Marvel fans haven’t had a chance to catch up with Clint since Natasha Romanoff’s (Scarlett Johansson) untimely death at the end of Phase 3. However, he’s likely to still be grieving — and so is Yelena Belova (Florence Pugh). With Pugh confirmed for the cast of Hawkeye, it’s safe to say Natasha’s end will play a similarly large role in the series.

‘Black Widow’ teases what’s to come in the Marvel show

If Pugh’s casting didn’t prove that Black Widow would be important to Marvel’s Hawkeye, the film’s end-credits scene certainly did. After Natasha and Yelena repair their relationship throughout the film, the final scene skips ahead to after Natasha’s death. When Yelena visits her grave, she receives a proposition from Valentina Allegra de Fontaine (Julia Louis-Dreyfus).

Valentina wants Yelena to kill Clint, and she offers her a convincing reason to do so. By telling Yelena that Clint is the reason her sister is dead, she spins the perfect tale to ensure Yelena does as she’s told. And Natasha’s sister is likely to join the many mobsters after Clint’s head in Marvel’s Hawkeye.

For that reason, fans will want to give Black Widow a watch before the show. Not only does it offer context about what Yelena will be up to, but it gives fans further insight into her character.

‘Avengers: Age of Ultron’ shows what Clint has to lose

Avengers: Age of Ultron may be the least-loved Avengers movie, but it offers a deeper look at Clint’s character than the first Avengers. That’s because the team finally gets to meet his family — a secret he’s kept up until this point.

And watching Clint interact with his wife and kids will help viewers comprehend what he stands to lose in the upcoming Disney+ series. To be invested in a character’s story, fans must find some way to root for them. Clint’s love for his family will give them that — and Age of Ultron serves as a perfect reminder of it.

Hawkeye premies on Disney+ on Nov. 24.