With one more “Halloween” film to come in David Gordon Green’s planned trilogy, fans might expect there’s little room for big twists and turns in the series’ penultimate feature, “Halloween Kills.” Prepare to be shocked, as Green’s film concludes with some jaw-dropping moments, including two major sequences that follow Karen Nelson (Judy Greer), daughter of the iconic Laurie Strode (Jamie Lee Curtis) and the unexpected heart of this second film.

As Greer explained earlier this week to IndieWire, much of the action of “Halloween Kills” follows a familiar — and eerily prescient — path, as the good people of Haddonfield, IL, join together to finally end the reign of Michael Myers who, oops, is still not quite dead yet. As news spreads that Michael is back on the prowl, various mobs form in and around the tiny, haunted town, including a group of former victims and a growing riot at the hospital where Laurie is trying to heal (quite badly, it must be noted).

While Karen attempts to bring some semblance of order and rationale to the growing fervor, even she can’t escape her desire to take down Michael when faced with him in the film’s final moments. Michael, per usual, has returned to his childhood home, and when Karen arrives, she does something pretty daring to distract him: She takes off his beloved mask.

“I was just so happy that it was me that was doing it,” Greer said during a recent interview with IndieWire. “It was pretty crazy. It was really scary! That was a scary moment, holding the mask.”

Greer said that much of her fear in that scene stemmed from her own terror that she’d somehow mess with Michael’s most favorite accessory (originally, and somewhat hilariously, a Captain Kirk mask, now rendered into something wholly different). “There are two masks, and [our special effects makeup artist] Chris Nelson is so protective of the masks, so if I seem really scared holding the mask, it’s mostly because I’m afraid Chris Nelson is watching,” she said. “Like, ‘She’s not holding it right. And she’s going to break it.’ I wanted so badly to make him happy and proud. So I was shaking because I was like, ‘See Chris, I’m holding it right. I’m holding it right!’”

But Karen’s mask-snatching is hardly the only twist to unfold during the final moments of “Halloween Kills,” and while both Karen and the audience are still juiced up from that particular plot movement, Green goes for the gut punch. With Michael seemingly dead (again) at the hands (and fists) of the mob, Karen takes a brief moment of respite in the Myers family home, standing in the same window that young Michael once gazed out from, taking in the full scope of Haddonfield beneath her.

You can probably guess what happens next. Michael, definitely not dead, bursts into the room, and murders Karen, as we observe all the gore and horror from the street below. Greer had plenty of time to prepare for the scene, but she’s still heartbroken by it. 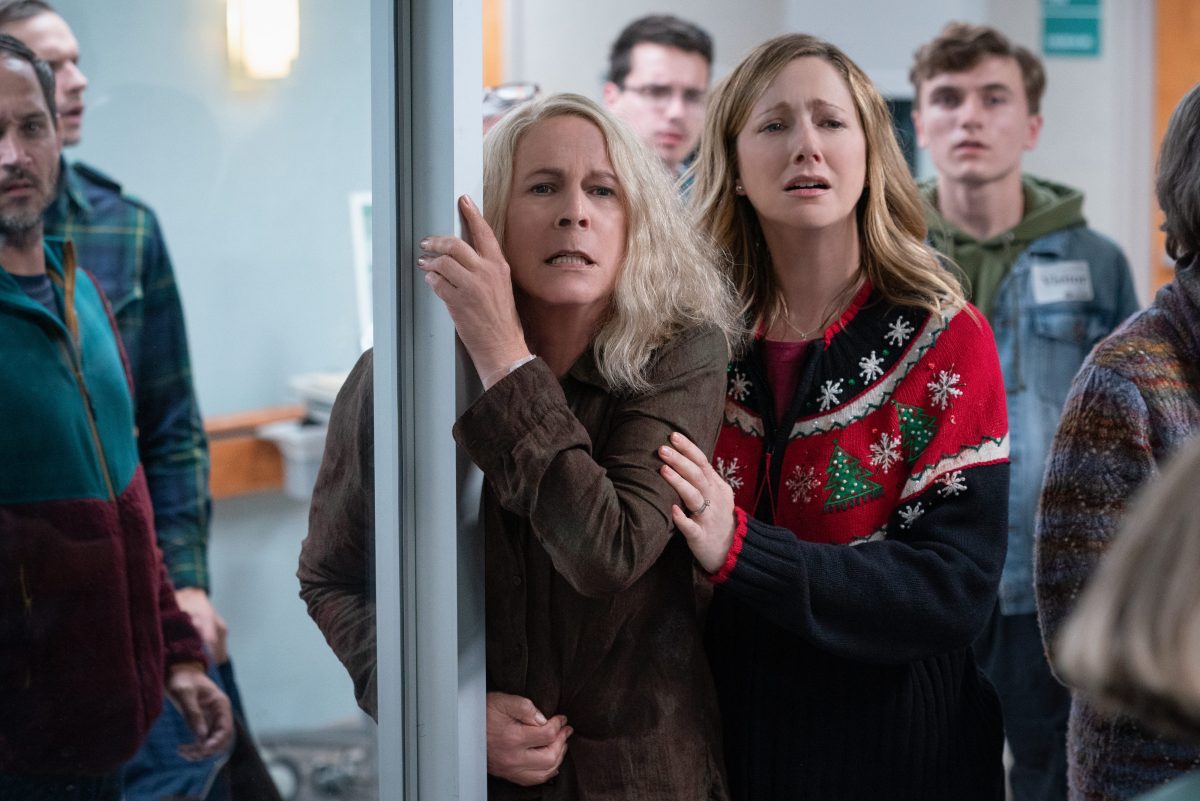 “David called me before he sent me the script to tell me what the ending would be, so I knew, and I was very sad,” Greer said. “First of all, I think it was the right decision and a cool decision. I was sad because I want so badly to go back to my family and make another one of these movies. So that was my sadness.”

The death of Karen will undoubtedly kick Laurie and Karen’s daughter Allyson (Andi Matichak) into high gear for the final film in the trilogy, 2022’s “Halloween Ends.” But it was also important to give Karen, an empathetic and essential character in the new series, a proper sendoff, even if it had to involve brutal murder.

“At the time, we didn’t know how we were going to do it yet,” she said. “Chris Nelson, he comes up with the kills. He and David together talk about like, ‘What would be cool? What haven’t we seen before?’ So when I got to Wilmington, before I started shooting my role, Chris was trying to figure out like, ‘What’s a really special way [to do this]? We’re going to do this. We have to do it special and perfect and beautiful.’”

She added, “He came up with this idea that would keep it very sort of avant-garde and cinematic. I think he succeeded. That end of the movie is like an opera. It’s beautiful, I think.”

And while Greer expressed her desire to continue working with Green, Nelson, and the rest of the “Halloween” crew, she’s not exactly holding her breath for Karen’s return. “Not looking good for me,” she said with a laugh. “But, hey, one never knows.”

A Universal Pictures release, “Halloween Kills” is now in theaters and streaming on Peacock.

As new movies open in theaters during the COVID-19 pandemic, IndieWire will continue to review them whenever possible. We encourage readers to follow the safety precautions provided by CDC and health authorities. Additionally, our coverage will provide alternative viewing options whenever they are available.