Guy Pearce Returns to ‘Neighbours’ Ahead of Show’s End 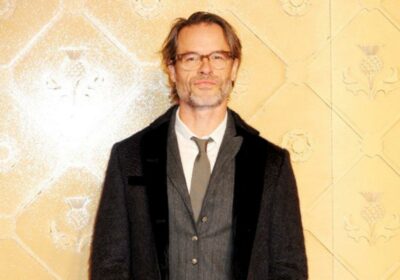 The ‘Memento’ actor joins original cast members Lucinda Cowden and Paul Keane in Melbourne for the end of an era shoot for the long-running Australian series.

AceShowbiz –Guy Pearce has returned to “Neighbours” for the soap’s final week of filming amid a furious redundancy dispute between its long-standing crew and production bosses. The “Memento” actor joined original cast members Lucinda Cowden and Paul Keane in Melbourne on Monday for the end of an era shoot for the long-running Australian series, coming to an end after 38 years on air. The last episodes will air in August.

Guy, who played Mike Young between 1986 and 1989, was photographed on set getting into a Triumph motorcycle jacket while standing next to his character’s motorbike. Lucinda Cowden, 57, who played Melanie Pearson from 1987 to 1991, was also spotted, wearing a bright red dress for the day of shooting.

Paul Walker returned as Des Keane, a role the 54-year-old reprised for “Neighbours” 35th anniversary in March 2020. Show bosses devastated fans in March with a tweet announcing production would be ceasing. “We are so sorry to say that after nearly 37 years and almost 9,000 episodes broadcast we have to confirm that Neighbours will cease production in June,” it said.

“Following the loss of our key broadcast partner in the U.K. (Channel 5) and despite an extensive search for alternative funding, we simply have no option but to rest the show,” it continued. “To our amazing, loyal fans, we know this is a huge disappointment, as it is to all of us on the team. We thank you for all your messages and support and promise to end the show on an incredible high. From here on, we are celebrating ‘Neighbours’.”

Network 10 addressed the end of the series by waling it a “difficult decision” and adding in March, “Today, Fremantle confirmed that Neighbours will cease production in June, after nearly 37 years and almost 9,000 episodes. This difficult decision came after the search for an alternative U.K. broadcast partner proved unsuccessful.”

Channel 5 confirmed the end of its 14-year deal with “Neighbours” in February, with a spokesperson telling MailOnline that the decision to axe the soap comes as the channel’s “current focus is on increasing our investment in original U.K. drama.”

The long-serving crew who make the iconic show, which launched the global careers of [cKylie Minogue], [cJason Donovan] and [cMargot Robbie], claim the production company Fremantle has refused to pay them redundancy.

Paul Stanley, an organiser with the Media Entertainment and Arts Alliance union, told Guardian Australia, “They’ve had Kylie Minogue and Jason Donovan come over to shoot scenes recently, which is great. That’s cool, but you’ve got people working here that took eight weeks off last year to ‘save the show.’ You’re saying you can’t pay us redundancies and yet you are sinking money into the talent”

While Fremantle Australia chief executive, Greg Woods, did not answer questions from Guardian Australia, he said the company had complied with its legal obligations.

Woods shared, “To safeguard the wellbeing of our cast and crew of whom are our primary concern, and with just over one week left of production, we will not be providing a detailed comment at this time.”

“Additionally, as part of company policy, we also do not provide comment on HR-related matters. However, I can confirm that we’ve sought external counsel to ensure that we provide the necessary support and that we meet everyone’s legal entitlements and fully comply with our obligations,” he added. “Our priority is and will continue to be to support the wellbeing of our cast and crew as the production draws next Friday.”