Grace Duggar is celebrating pumpkin season and it’s the cutest thing ever!

John-David Duggar and Abbie Grace Burnett shared an updated photo of their baby girl and Counting On fans are still enamored with her.

What better way to celebrate October’s arrival than a cute little one with a bunch of pumpkins?

Born back in January, Grace Duggar has made a splash in her parents’ lives. Counting On fans watched as John-David Duggar and Abbie Grace Burnett courted, got engaged, wed on the show, and announced their pregnancy.

The couple has been a fan-favorite for quite some time. They are also the last Duggar couple to have been married and they are coming up on their second wedding anniversary. Grace was born a little over a year after the couple tied the knot. Since then, she has been keeping both of her parents on their toes as they navigate life with a baby during quarantine.

Since her birth, Counting On fans have gushed over how adorable little Grace Duggar is. She is a perfect mixture of John-David and Abbie, which followers love to note. They haven’t shown too many photos of the baby girl, which is why fans flock to their page when they do. 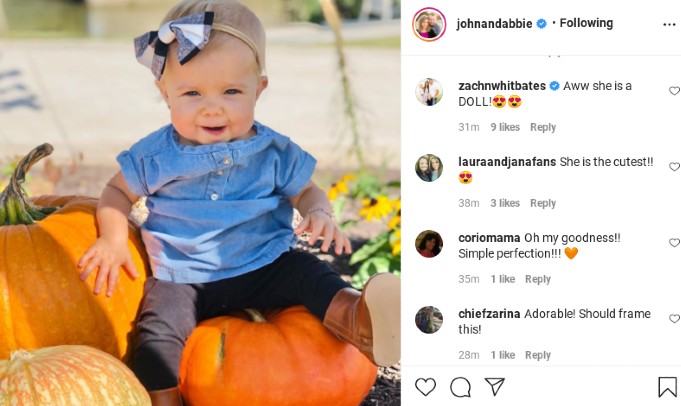 What have John-David Duggar and Abbie Grace Burnett been up to?

With Counting On off the air, there hasn’t been much of an update on the family of three. They were last shown celebrating Abbie Grace Burnett’s birthday with a birthday parade and some gifts in order to respect the quarantine guidelines.

Some fans have wondered when the two would welcome another child, and as of yet, that hasn’t been on the radar. Abbie didn’t have the best labor, but once she agreed to an epidural, things went better. She was also incredibly sick throughout her pregnancy, making it a less than desirable experience all over.

Both John-David and Abbie have revealed they won’t be having a huge family like his parents, Jim Bob and Michelle Duggar. Both were older when they tied the knot, and even if they wanted a big family with lots of children, it isn’t possible.

Having Grace Duggar has shown them what life is like with a little one. They are enjoying being her parents and showing her off on social media. She has done plenty of things with her parents and spent a lot of time with her aunt Jana Duggar.

In just a few months, Grace Duggar will celebrate her first birthday. She is the youngest Duggar cousin born from the 2019 Duggar baby boom.

With the holiday season approaching, Abbie Grace Burnett will likely be sharing even cuter photos of the growing baby girl.

Counting On is currently on hiatus.