Good Doctor Introduces 6 'Newbies' In First Post-COVID Episode — Who Fared Best? And Who's Already Out? ABC’s The Good Doctor entered a post-COVID world on Monday night, marking the first medical drama to move past the pandemic and on to other storylines. But with real-world infection rates on the rise, and a member of the show’s cast among the infected, we have to ask: Does it feel like the right decision to sidestep this unprecedented crisis?

To be fair to the show, a public service announcement did open the episode. Series star Freddie Highmore acknowledged that the following hour “portrays our hope for the future — a future where no one will have to wear a mask, or take other steps to stay safe from COVID.” After that, Episode 3 turned its attention to a new crop of surgical applicants looking to make their mark and earn one of four residency slots at St. Bonaventure. 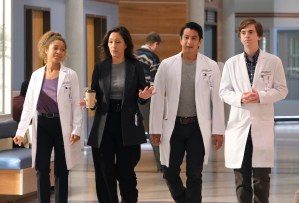 In a moment, you’ll be asked for your first impressions of the newbies, as well as your opinion on the series’ decision to look beyond the pandemic. But first, a brief recap:

Following an initial round of interviews, the six applicants shadowed Shaun, Park and Claire. Among them was mansplainer Will Hooper (Motherhood: Fort Salem‘s Sam Robert Muik), a Rhodes scholar and Olympic rower whose arrogance ultimately did him in; and John Lundberg (Shrill‘s Michael Liu), an otherwise ideal candidate whose inability to gel with the senior residents led him to withdraw himself from the applicant pool.

Those moving forward include Jordan Allen (Mrs. America‘s Bria Samoné Henderson), whose assertiveness impressed Andrews; she undermined his medical judgment in front of a 17-year-old breast augmentation patient, potentially jeopardizing her chance at residency on Day 1 to argue what she thought was in the patient’s best interest. Another early standout was Asher Wolke (The Real O’Neals‘ Noah Galvin), whose enthusiasm and drive ultimately afforded him the opportunity to shadow Lim and Claire during a rather unusual heart transplant. He also had the most interesting backstory: an atheist with a God complex who left the Hasidic community at age 18, at which point he decided to go to med school and start dating men. (That’s a lot to unpack in subsequent episodes, and I for one look forward to it.) 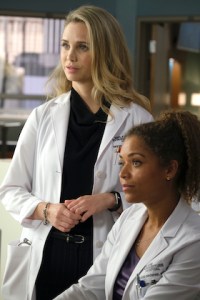 The senior residents weren’t as jazzed about the other two candidates: Olivia Jackson (played by newcomer Summer Brown), who routinely downplayed her credentials and made every answer sound like a question; and Enrique Guerin (Luke Cage‘s Brian Marc), who showed up for his interview in a hoodie and swim trunks — need I say more? Both showed potential, though, and will have the chance to wow Drs. Murphy, Browne and Park another day. They’ll also have to impress Morgan, apparently, since she refuses to accept her new reality as an internist. She was a disruptive presence throughout multiple surgeries and was eventually asked to remove herself from the operating theater.

On the relationship front, Shaun inadvertently insulted Lea when he insinuated that he liked her body, but not her voice. After Jordan, Enrique and Glassman offered their two cents, Shaun apologized to his girlfriend and assured her that her voice is a source of comfort to him.

OK, now it’s your turn. What did you think of The Good Doctor‘s first non-COVID episode? And which of the “Newbies” moving forward did you like the most? Sound off below.