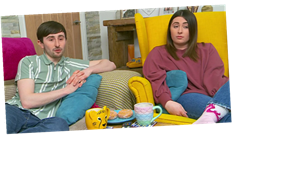 Many viewers were devastated when Gogglebox’s Pete Sandiford revealed he was engaged.

But his plans for the wedding to fiancée Paige Yeomans are well underway.

On Friday night’s episode of the show, he shared more details about his upcoming nuptials and revealed that he’s going grey from the stress of it all.

He also shared details of the wedding buffet, which he said will include “cheese, sausages, pineapple and cocktail sticks”.

Pete said the DIY aspect of the buffet would “save on the hedgehog”.

Sophie suggested he should “just get tinned pineapple”.

Pete jokingly agreed, telling her “I’m not made of money.”

Pete, 26, publicly announced his engagement to fiancée Paige on Gogglebox back in February.

He shared a photo of the couple to his Instagram back in October.

The pair can be seen snuggling up to each other in the adorable snap.

“My Mrs and best mate what more could I ask for,” Pete wrote in the caption. “Don’t worry @sophiesandiford1 you are a close second best friend.”

The photo was taken in 2019, before the coronavirus lockdown.

Not much is known about Paige, other than she attended Queen Mary University of London, where she studied English language and linguistics.

According to her LinkedIn page, she works as an Emergency Service Call Handler.

One wrote: “We don’t need reminding every episode that Pete is getting married, my heart can’t take it,” with a broken heart emoji.

Another added: “Pete and Sophie just get better and better.”

In an earlier episode of the show, sister Sophie asked her big bro how he felt about his engagement.

“I’m going to have a wife,” he said dazedly.

“Yes, you’re going to have a wife,” Sophie replied.

The duo have long been fan favourites, coming out with some cracking lines each episode.

Friday night’s show also featured plenty of the usual Gogglebox innuendo, with the cast in hysterics over Jamie Oliver “stroking his tarragon”.

And everyone enjoyed Bridgerton’s Regé-Jean Page’s rendition of Rain Before Rainbows for a Cbeebies bedtime story.

Gogglebox airs on Fridays at 9pm on ITV.