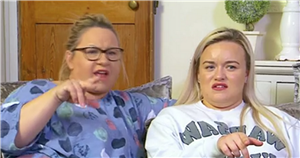 Gogglebox star Paige Deville claimed she was ‘snubbed’ by the show in exchange for a pair of show favourites at the National Television Awards this month.

Paige claims Pete and Sophie Sandiford were invited to the awards ceremony, at which Channel 4 show Gogglebox scooped the gong for best Factual Entertainment Programme, while she was asked not to.

Pete and Sophie Sandiford, along with the Malone family, attended the event at which Julie Malone delivered an emotional speech dedicated to the Gogglebox members who passed away recently.

But now she has gone a step further and opened up to BirminghamLive about the NTAs, explaining: "I wasn’t asked to go to the National Television Awards.

"It is the more popular ones who are asked such as Pete and Sophie and the Malones.

"People will say it is just sour grapes but when you give a lot of your time to a show like I did for Gogglebox it is hurtful not to be asked to be part of the celebrations.

Fans will know Paige from appearing alongside her mum Sally on the programme – but just last week she announced that she would be leaving the show for good.

She was originally scouted to appear on the Channel 4 programme while out at the hairdressers. She further claims that her mum was given an "ultimatum" which forced an "irreversible" split between the pair.

Paige said that filming was "tough", as the stars were permitted to stop the telly to go to the toilet but wouldn’t have a break otherwise, and would eat while filming the show.

She further recalled that her mum sat with her arm around her for four hours due to an instruction from producers.

And when Paige bought a car, she claims the show requested she make it clear the purchase wasn’t endorsed by Gogglebox.

In her original statement on Twitter, Paige wrote: "I have made the decision to walk away from Gogglebox.

"It's been an experience but one I cannot continue with due to long hours of filming, restrictiveness, control of our actions and opinions and zero aftercare support. But hey, who cares about ex cast, their NTA winners[sic]."

A spokesperson for Channel 4 said: "The welfare of contributors – past and present – is of paramount importance and robust protocols are in place to support contributors before, during and after taking part in the series."

Fans have reacted to Paige's announcement with disappointment, taking to social media to share their messages to Paige and Sally.

One posted at the time: "I loved you and your mum on Gogglebox. Shame to see you go but you have to do what's right for you."

As another said: "Sad to hear Paige Deville and her mum Sally are leaving Gogglebox! I love their sense of humour and witty comments. Good luck for the future."