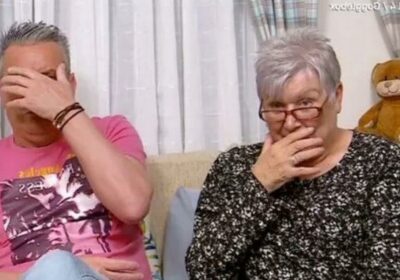 Gogglebox has been hit with complaints from Ofcom after a scene involving a duck and a woman going to bed together went much too far for some viewers.

Shocked by the X-rated human-animal behaviour unfolding on their screens, fans of the Channel 4 show, which recently caused a furore after Shirley made a "brutal" comment to her husband, were left utterly horrified and "traumatised".

There have regularly been eye-opening segments and hilarious moments on Gogglebox – as without them the show's entire concept would likely fall flat.

Yet Apple TV+'s quirky new series Roar was a whole other level.

Featuring eight different women and based on short stories by popular author Cecelia Ahern, one story called The Woman Who Was Fed By A Duck saw actress Merritt Weaver becoming close to a duck after struggling in her dating life.

As the story unfolded, character Elisa then ended up going to bed with the animal, who ended up seducing her and giving her oral sex.

The bizarre scene puzzled and disgusted the show's telly-watchers in equal measure, with viewers at home raging about what they had just seen.

In the wake of the episode, angry viewers launched 149 Ofcom complaints in response.

"I'll never look at a duck the same way again #Gogglebox," one person tweeted at the time.

Another viewer said: "I'm so glad I watched Gogglebox on catch up on Sunday and not Friday because that 'lady s**gs a duck' segment truly has ruined my day (which luckily is a Monday) but it could have ruined my entire weekend."

"Why does it exist? Why's it on telly? Just why why why whyyyy #gogglebox," they added.

While a third fan was so outraged by the concept they exclaimed: "Caught up with #Gogglebox, and whoever made that #roar program needs sacking!! I can't look at a duck in the same way now. #Disgusting."

"That show Roar. Is disgusting! Just seen a clip of a talking duck having oral sex with a woman on #gogglebox and I'm legit traumatised #roar," a fourth tweeted.

"WHO the hell came up with that show, and WHO approved it! Yuck."

While viewers were more interested in sharing how repulsed they were by the images, fan-favourites Giles and Mary took a more logical approach to the concept of a duck achieving such a sexual feat.

"The duck can't physically," Giles said simply, as Mary looked on at her husband in bewilderment.

"Well he can, he can use his beak as a penetrative tool," the journalist said at first, before adding that the show was "the worst programme she'd ever seen".

For all the latest TV and showbiz news, sign up to our daily newsletter here.