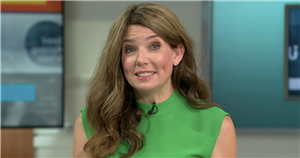 Good Morning Britain viewers were in for a surprise on Friday as journalist Pip Tomson kicked off the show.

The 43-year-old presenter opened the latest edition of the ITV breakfast programme instead of regular newsreader Sean Fletcher.

Pip was seen on air at 6am, with regular anchors Charlotte Hawkins, 46, and Kate Garraway, 53, taking over the reigns at 6.30am.

Taking to Twitter, one excited viewer said: "Welcome Pip, not sure where you have come from but everyone starts somewhere for the first time. Good luck."

Another added: "Good morning ladies and it’s great to see Pip on GMB this morning."

"Can we not keep pip as a main presenter..she is good ..real professional," a fourth viewer asked.

A fifth social media user said: "Pip has the right tone and attitude for GMB."

Pip revealed she was standing in on GMB ahead of her appearance on Friday.

Taking to Instagram on Thursday, the York resident penned: "I’m in the studio tomorrow (FRI).

"Rousing you from yr slumber to bring you the news headlines from 6am on GMB. Kate and Charlotte on from 6.30am. Do join us. Lots to discuss including looming ‘Freedom Day’."

Pip is a news correspondent who has worked on Good Morning Britain since 2013, making her one of their longest-serving reporters.

She is usually seen delivering news on locations around the UK.

There have been a number of staff changes at Good Morning Britain since Piers Morgan dramatically left the show in March this year.

GMB bosses has replaced Piers with an ever-changing roster of stars since his sudden departure.

Piers stepped down from his role on the ITV morning show after Ofcom received 41,000 complaints about him.

He stormed off GMB on March 9 after getting into an argument with weatherman Alex Beresford.

Bosses are yet to find a permanent host to fill in Piers' shoes.

Good Morning Britian airs weekdays on ITV at 6am