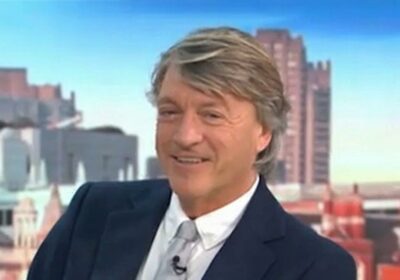 However, as he finished speaking with presenters Richard Madeley, 66, and Susanna Reid, 51, Richard told the astronaut: "May the force be with you … Bet you've heard that a few times."

Taking to Twitter, many fans couldn't help but laugh at the Good Morning Britain host mixing up the movies.

One person said: "Why did Richard Madeley just say to Tim Peake, may the force be with you?"

A second wrote: May the force be with you is not from Toy story!"

Richard recently revealed that he's preparing to take a break from his hosting duties at Good Morning Britain.

The host has been a regular on the show since Piers Morgan's exit last year.

Piers left his position as host, after receiving over 50,000 Ofcom complaints regarding his comments about Meghan Markle.

Appearing on Channel 4's Sunday Brunch on Sunday 12, June, Richard said: "Since Piers left, as you know, his chair has been a kind of rotating gig and all sorts of presenters have come in and done it.

"It is true that of late I’ve kind of risen to the top of that pile I suppose. But I don’t know for how long as I’m on quite a short contract."

He added: "I don’t know what’s going to happen. I’ve got quite a big break in the summer, I’m going to France and then I’ll be back quite a lot in the autumn.

"But as for next year I have no idea and that’s fine for me. I’m not chasing it, you know.

"If they turn around and say ‘We’re relaunching the programme and thanks Richard for all the fish but we’re going to use so and so,’ that would be fine with me."

For all the latest TV and Showbiz news, sign up to our daily newsletter here.