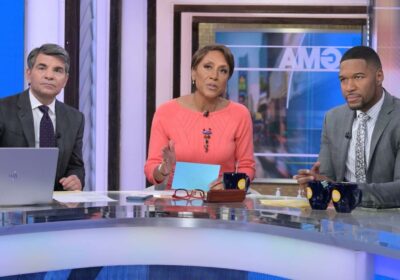 Good Morning America is a permanent fixture on television each week morning for many viewers around the United States.

However, last week a number of subs were present due to the absences of both Michael and Robin.

VIDEO: Michael Strahan’s family life away from GMA – all you need to know

Michael was missing from the program on Monday, with Eva Pilgrim keeping his seat warm alongside Robin and George.

While the former football star returned, Robin was missing from GMA for the rest of the week, with Amy Robach filling in for her, along with Eva, who covered for the TV anchor on Friday’s show.

Robin revealed on social media that the reason for her absence was to do with a work assignment, although she didn’t specify what it was.

It’s been a busy week for Robin away from work too, as she was busy promoting the premiere of Wakanda Forever, which aired on Friday night.

MORE: Michael Strahan opens up about working with George Stephanopoulos on GMA

The special show, which aired on ABC, was produced by Robin’s production company, Rockin Robin TV, and focused on the worldwide impact of Black Panther, and on the legacy of the late actor, Chadwick Boseman.

It also featured an emotional interview by The View’s Whoopi Goldberg, who exclusively sat down to talk with Chadwick’s widow, Simone Ledward Boseman.

All the GMA co-anchors are busy with projects away from work, and often share snippets of them with their fans on social media.

Earlier in the year, the show celebrated Robin and George, who were named as the longest-serving news hosts on a network show, having worked together on GMA for 13 years.

Praising working with her co-stars during an interview with AP, Robin said: “We would never, ever do anything to make each other look good at the expense of the other.

“That’s such a comfort. To have that, it makes you take chances, and I think the audience picks up on that — the way that we are so different in many ways but so common in others.”