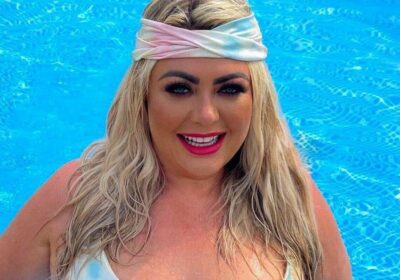 Gemma Collins apparently has her sights set on the This Morning sofa.

The Only Way Is Essex star is a big fan of current presenter Holly Willoughby and thinks she would be perfect to take over if Holly ever decided it was time to move on.

A source told Heatworld.com: “There’s so much gossip going around the TV industry right now that ITV bosses are lining up a replacement for Holly, should she ever go, and Gemma wants to put herself at the top of the list to be considered.”

The insider said the GC feels that replacing Holly “would be like taking over from TV royalty”. And it seems she is serious about snagging the seat next to Phillip Schofield, as the source also claimed Gemma is working on her image and experimenting with more sophisticated looks to help her catch the eye of TV bosses.

Gemma has been sporting a different look of late anyway as she has recently shed a lot of weight.

The 40-year-old has been working hard to get in shape and flaunted the results in a bikini picture as the heatwave struck the UK.

The snap shared on Instagram showed off her enviable curves as she took a dip in her pool in a tie-dyed swimsuit and a matching headband, with her blonde locks flowing down her back. Captioning the stunning snaps, Gemma wrote: “IM READY FOR THE HEATWAVE ……HONEYS …. Calling all summer HUNS you need to look the part ! Head over to my website if you want to look fabulous !!!!! GUESS what it’s not throw away fashion !!!! Can’t bear it !!!!”

Fans flocked to the comments section to say Gem looked “amazing” and that she was an “inspiration”.

“We love you… there is only one GC!” gushed one admirer. Gemma is no stranger to the small screen.

After getting her start in TOWIE back in 2011 she has appeared in shows such as I’m A Celebrity… Get Me Out Of Here!, Dancing On Ice and Celebrity Big Brother and even has her own franchise, Gemma Collins: Diva.

The reality star also has her own podcast.