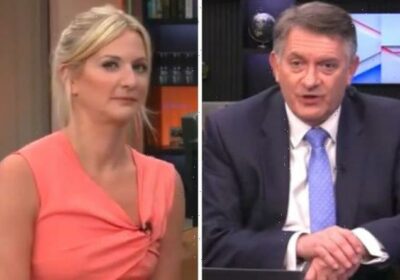 Simon McCoy and Alex Phillips usually present the daily 3pm slot on GB News. Although, on Wednesday, McCoy was replaced by Paul Hawkins, who stepped in to co-host the segment with Phillips. As the duo introduced the programme, they didn’t reveal why McCoy was absent from the show. However, Phillips couldn’t help but make a cheeky remark about McCoy’s age.

“Coming up,” Phillips added as Hawkins continued: “A clamp down on illegal immigrants crossing the [English] Channel to enter the UK.

“Britain will pay the French authorities more than £50million to double the number of police patrolling the beaches.

“We will be asking if that is money well spent.”

READ MORE: When does Meena get found out in Emmerdale

Phillips continued: “Also, how safe do you feel as a woman on the streets?

“The government is creating a top police role as part of a range of measures to tackle male violence against women.

“It could include making street harassment like wolf-whistling a crime.”

Hawkins concluded: “And, cricket is launching a new format today to attract more fans to the sport. It’s the fourth format of the game, but will it work?”

Later on in the programme, the presenters were discussing fossils, which is when Phillips couldn’t help but take a dig at her usual co-host, McCoy.

“Coming up next,” Hawkins began. “If you’re a fossil fan.”

“Who isn’t a fossil fan?” the host continued as Phillips started to laugh.

“What’s your favourite fossil?” he went on to ask his new co-host.

“I was going to say, Simon McCoy,” Phillips joked as she took aim at McCoy.

As her co-host tried to continue with the segment, Phillips quickly apologised and said: “Sorry, Simon.”

Hawkins added: “After the break, we’re going to be talking about amateur fossil finders who used Google Maps to locate one of the biggest collections of rare sea fossils in the UK.”

In March this year, McCoy announced he would be leaving BBC News after 18 years to join GB News.

Ever since, he has co-hosted the 3pm daily slot with Phillips.

GB News confirmed McCoy would be joining the team in a statement on Twitter.

It read: “One of Britain’s best-loved and most charismatic journalists, Simon McCoy, is joining GB News with an afternoon programme.”

McCoy and Phillip airs weekdays at 3pm on GB News.