Home » TV & Movies » Game of Thrones: Has the real reason Shireen Baratheon was sacrificed been revealed?

Game of Thrones: Has the real reason Shireen Baratheon was sacrificed been revealed? Game of Thrones fans will never forget that horrific episode in season five in which Stannis Baratheon (played by Stephen Dillane) sentenced his daughter to death.

Although Shireen Baratheon (Kerry Ingram) had done nothing wrong, Stannis was convinced by Melisandre (Carice van Houten) that her sacrifice would aid his conquest to become king of Westeros.

As the young girl screamed, and her parents looked on, she was tragically burned at the stake, leaving Stannis without an heir, and indeed nowhere else to turn in the coming wars.

Fans of the show presumed Stannis from the book franchise would never do this same act, as he is a far different character on paper.

However fans of the franchise have been theory crafting, and have come up with the one reason Shireen would be burned alive once again in the books – and it has nothing to do with Melisandre, and everything to do with greyscale, the life-ending disease.

Reddit user halyasgirl recently laid out the reasons why this would be the only way Stannis would kill his daughter in this manner, writing: “At the end of season five of Game of Thrones, Melisandre convinces Stannis Baratheon to sacrifice his daughter, Shireen, to the Lord of Light to lift the blizzard plaguing his army.

“The exact circumstances make this impossible in the books, however, as both Shireen and Melisandre remain at the Wall while Stannis is on the march.

“This seems wildly out of character for book Stannis, who is well known for his tenacity in the face of adversity, and moreover, seems extremely unlikely to burn his daughter and only heir at the stake.”

The diligent fan went on to say: “My theory is that Stannis will ultimately burn Shireen because her greyscale reemerges.”

Fans of the show will remember the wildly uncontrollable greyscale which took ahold of Jorah Mormont (Iain Glen) back in season six, and indeed how people feared it.

Shireen was famously cured of the disease when she was a child – but the Game of Thrones fan believes this would have eventually come back. 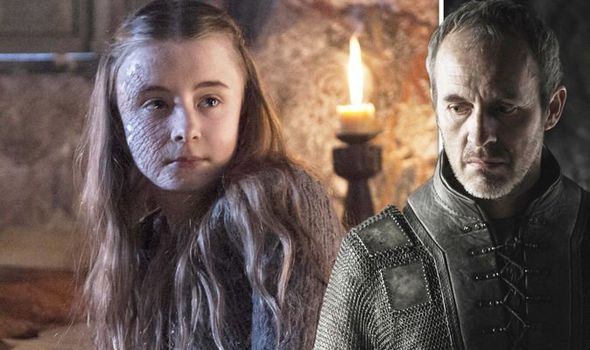 They continued: “According to legend, greyscale is at least partially a supernatural disease, caused by Garin the Great’s curse upon the Valyrians. And we know that magic is increasing in the world with the birth of Dany’s [Emilia Clarke] dragons.

“Furthermore, the wildlings believe that no one recovers from greyscale, that ‘the grey death sleeps, only to wake again,’ and openly advocate for Shireen’s death, saying that she is ‘already dead.’”

They continued: “That’s where Melisandre comes in. [Her] attempts to treat greyscale include scalding-hot baths, and stone men are said to have an aversion to fire similar to those in the later stages of rabies’ fear of water, suggesting that there is some association with heat and fire being used to counter the disease.”

“Stannis has been known to make some extreme decisions when backed into a corner,” the concluded. “And my prediction is that Shireen’s burning won’t be a sacrifice so much as a desperate, last-ditch attempt at a faith healing that goes horribly wrong.”

In the HBO series it wasn’t too long after Shireen’s death that Stannis was eventually defeated in battle and killed off. 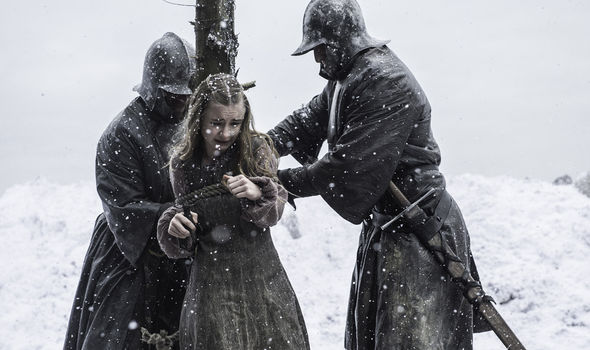 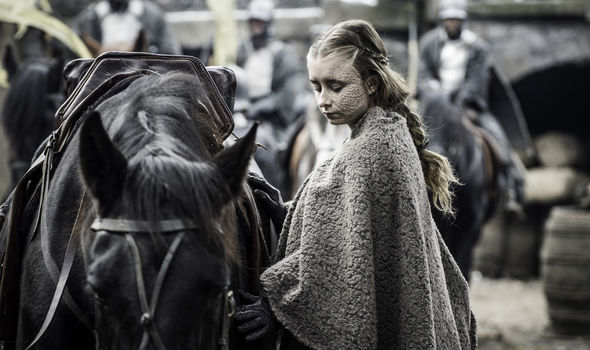 And, as fans now know the general idea of how the books are supposed to end, Stannis’s daughter was never meant to survive the entire journey.

If, in the books, Stannis does eventually panic and attempt to use fire to cure Shireen’s greyscale, he may be distracted enough that he is killed off as well.

Meanwhile, franchise creator George RR Martin recently spoke to Joe.ie about the upcoming sequels and prequels of the show – and even went on to hint at the return of an Ice Dragon.

An Ice Dragon was first thought up for the children’s book called The Ice Dragon.

During the interview he teased: “I’ve a lot of my stuff in various stages of development.

“Sandkings, The Ice Dragon, Wild Cards, and of course we’re developing a number of Game of Thrones prequels that are drawn in large part from Fire and Blood, the book of Targaryen history that I had out in November.”