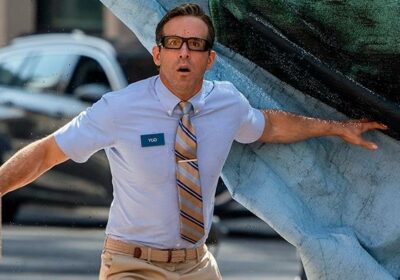 Following a strong pandemic box office debut with an estimated $28.4 million opening weekend, it sounds like the video game action comedy Free Guy will end up getting a sequel. Ryan Reynolds took to social media with news that Disney already wants Free Guy 2.

Here’s what Ryan Reynolds posted to Twitter over the weekend, teasing Disney’s hunger for Free Guy 2:

Reynolds couldn’t help but be a little cheeky in his post by pointing out that the project pushed as original intellectual property will now become part of the franchise machine by having a sequel developed. Then he referenced one of the funnier lines in the movie from Taika Waititi’s douchebag video game creator character Antwon. Trust us, it’s better if you just see it in the movie rather than having it explained.

The news comes after director Shawn Levy recently mentioned that they had ideas for where a Free Guy sequel could take the story. However, he didn’t want to get ahead of himself. Levy said:

“I’m a little superstitious. We have some really fun ideas for where Guy could go next. But I’ve also learned over the years, man, I’m going to make one thing as perfectly as I can. And then it’s in the hands of the box office and cultural fates.”

Now that the first weekend’s box office numbers are in, it would appear that Disney is pretty happy with the film’s performance. Even though it’s hardly a record-breaking debut, these kind of numbers during the coronavirus pandemic are impressive. So more than likely we’ll be seeing a sequel coming together at some point. However, it should be noted that just Disney wants a sequel doesn’t mean we’ll get one immediately. It’ll take time for the screenplay to come together, and Disney still has to greenlight it before production can begin. Reynolds also has plenty of projects coming up to keep him busy, so scheduling could prove to be a challenge.

Free Guy didn’t end with any clear tease for a sequel, and the story wrapped up rather nicely. But, as Shawn Levy said, there are already ideas behind the scenes for how to continue the story. Not every movie needs to provide obvious set-ups for a sequel. In fact, it’s often better if a movie is self-contained and doesn’t worry about trying to build a world intended to sustain an entire franchise. So hopefully whatever ideas they have cooking for Free Guy 2 will offer up a creative spin on what’s already been established.