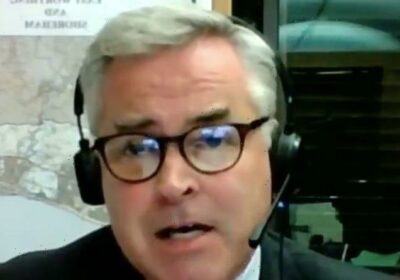 MP Tim Loughton has slammed the France for blowing “out of proportion” over the fishing rights row, saying it’s due to “Macron feeling the pressure” of next year’s French election.  It came after France detained a British scallop trawler and fined two other UK fishing vessels over the row.

“Those 44 percent are French-that represents 98% of all the boats that applied for licences.

“Most of these licenses were given on New Year’s Eve right at the beginning of the post-Brexit period.

“We’ve been actually rather generous.”

He went on: “I’m afraid the French appear to want to turn into a major political row and their response has been completely disproportionate.

“When I don’t know exactly what the mechanics of this licence of this particular boat the paperwork that’s gone astray.

“It’s been completely heavy-handed I think-the way that they’ve impounded that that boat and are threatening to cut off fish being landed at many French ports.

“And now talking about the electricity supply to the Channel Islands.”

He continued: “This goes way beyond a dispute over paperwork over a very small number of boats that hasn’t yet been resolved.

“We have been exceedingly generous.

“You’ve heard to the detriment of Jersey fishermen and fishermen on the south coast and constituencies like mine as well.

“So this has got completely blown out of proportion by the French because it happens to be election year next year. And President Macron is feeling the pressure.”

Tension is escalating between France and the UK after France made threats over fishing in the UK waters and detained a British vessel.

George Eustice told Sky News: “We don’t know what we’ll do, they said they wouldn’t introduce these measures until Tuesday at the earliest, we’ll see what they do.

“But if they do bring these measures into place, well, two can play at that game and we obviously reserve the ability to respond in a proportionate way.