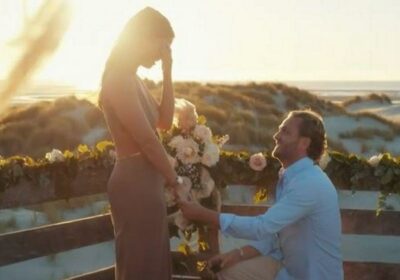 Ferne McCann was so overcome with emotion after beau Lorri Haines popped the question that the mum-of-one nearly forgot to reply.

Lorri whisked Ferne, 31, away on a trip to France to mark their six month anniversary and, while the reality TV star had begun to lose hope of her beau asking her the big question, he went on to do so.

Walking her up to a beach terrace as the sun set behind them, Lorri got down on one knee and presented a beautiful ring to Ferne.

Ferne then covered her face with her hands and began to cry, leaving Lorri on his toes as he waited for her response.

Eventually, Ferne got herself together and proclaimed: "I can't even cope. Yes!"

Lorri pulled out all the stops for the romantic moment, and jetted Ferne off to France via private jet.

Upon arrival, they had a lavish lunch at a French chateau before heading off to the beach.

After she said ‘yes’, one of the first people she told about their happy news was TOWIE co-star James Argent.

James, 34, took to Instagram to post a screenshot from his FaceTime call with his friend who can be seen flashing her giant engagement ring.

Both reality stars can be seen beaming into the camera and Arg captioned the post with a touching message.

He said: "The very moment that one of my closest & most special friends @fernemccann tells me she’s just got engaged to the very lucky @lozzahaines.

"You deserve this more than anyone my beautiful friend & I know he will take good care of you! Congratulations."

Ferne wasted no time in responding, commenting: "Ahhhhh darling love you so much beyond happy on cloud 9."

A source went on to tell OK! that was Ferne was “bowled over” by Lorri’s grand gesture.

They told us: “All of Ferne’s friends are really excited for her. She’s a romantic and she’s been looking for true love and now she’s found it.

“She’s a believer in 'when you know you know'. She’s always been seeking someone who would whisk her away and she was bowled over by Lorri’s proposal.

“She’s really happy and it was a long time coming. Anyone who has seen them together and seen how loved up they are knows this is a natural next step for them.”

Ferne announced her exciting news on Instagram by sharing a snap of her flashing her stunning diamond engagement ring to the camera.