Warning: The following contains spoilers for Sunday’s Season 6 premiere of Fear the Walking Dead. If you haven’t watched yet, use your head like it was still attached and shuffle away from this recap.

Toward the end of Sunday’s Season 6 premiere of Fear the Walking Dead, Virginia was told that “Morgan Jones is dead.” But considering that it was Morgan who told her that, she was understandably skeptical. What was our embattled hero going on about? And who was the series’ new Morgan? Read on and find out. 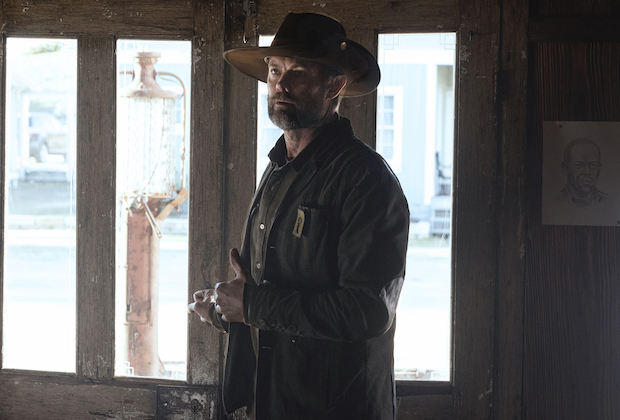 ‘A CHEF NEVER REVEALS HIS SECRETS’ | After a prologue in which a cigarette-smoking dude spray-painted “the end” on a wall, we cut to a guy named Walter making the acquaintance of arguably the most charming and enigmatic fellow since Strand — one Josiah LaRoux (Demetrius Grosse, late of The Rookie). Turned out, it had been his dog, Rufus, who’d been chasing Walter hither and yon, and now that the pooch had delivered his quarry to his master — and Josiah had spotted a key around the stranger’s neck — it was off with Walter’s head. (Clearly, that key was going to be the, um, key to something.) As Josiah packed away Walter’s noggin in a picnic basket, Virginia called the bounty hunter and gave him a new assignment: find Morgan Jones.

Speaking of whom, Morgan was now rocking eyes that were red enough to get him mistaken for a vampire (or me after a bender) and a gangrenous chest wound owing to the gunshot he took in Season 5’s finale. On the plus side, he had a rad pad assembled atop a water tower and a sudden superpower: He stank so bad that walkers just waltzed right by him! After scoring a gun from a police car, Morgan was almost killed by a stranger named Isaac, who mistook him for a roamer. The guy was hella nice, but Morgan wasn’t interesting in making a new friend, not even one who offered to remove the bullet that was lodged in his shoulder. Whoever had stitched up Morgan had for some reason neglected to take it out.

‘MY, MY, MY, YOU SURE ARE SWEATING’ | Quicker than you could say “It’s a small world, after all,” Josiah caught up with Morgan. Isaac tried to lie that he’d never seen the man in Josiah’s sketch — wait, how the hell had he gotten a sketch? Post-apocalyptic fax machine? — but he was not an impressive liar. Nonetheless, he managed to get Josiah to mosey on down the road in search of a zombified Morgan. While the baddy wandered off, Isaac somehow deciphered the coordinates on Morgan’s bag and got his now-unconscious non-pal up the steps of his posh water tower. When Morgan came to, Isaac pleaded with him to use his superpower to sneak supplies past the walkers outside his and his pregnant wife’s hideout before she gave birth a month early. (So much to unpack!)

Morgan, back to being his disillusioned old self, refused. He wasn’t the same Dudley Do-Right that Isaac had seen on a tape at a truck stop. Just as Isaac became so desperate as to press the issue at gunpoint, Josiah used his truck to pull down the water tower. Though Morgan subsequently protected Isaac, he couldn’t bring himself to kill Josiah and instead just shot him in the arm. After the acquaintances fled in Josiah’s truck, then on foot, Morgan revealed that the water tower co-op was for the person who’d stitched him up, whoever that had been. All he’d known was when he’d awakened after being shot and left for dead by Ginny, he was sorta sewn up and had a note beside him that read: “You don’t know me, but I heard your message. You need to do the same. You still have things left to do.” (Sherry, was that you?) Well, where Isaac had stashed his wife Rachel was safe, he assured Morgan. It would be safe for his rescuer, too. 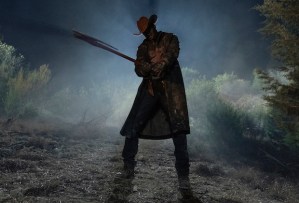 ‘YOU CAN’T LET IT END LIKE THIS’ | En route to Isaac and Rachel’s, Morgan revealed that Grace could’ve stayed in the water tower, too. Isaac, in turn, accidentally shared that he used to be one of Ginny’s Rangers. But he’d preferred Morgan & Co.’s idea of giving away what Ginny & Co. were charging a hefty price for. He wanted to do what the Good Samaritans had been doing, and Morgan could be a part of that — that is, if he let Isaac remove that damn bullet! Arriving at Isaac and Rachel’s hideaway, he gave Morgan his bag of supplies to usher through the walkers who’d been attracted by a squeaky fan. Isaac would take another route in and hopefully get there in time for his child’s birth. Unfortunately, Morgan loudly collapsed a couple of steps into his mission, so Isaac turned around and intervened. Despite being outnumbered and Morgan having only one good arm, they rendered all of the undead dead-dead.

As Rachel groaned from labor pains, Isaac pitched Morgan on the idea of rebuilding the secret spot for all of his friends. (Somewhere, June’s eyes had to have lit up.) When Josiah arrived — he never seemed to be more than a half-step behind — Morgan surrendered in order to save Isaac and Rachel. But just as the bounty hunter was swinging to behead his victim, Isaac tackled him, and in turn, Morgan saved Isaac. It had to be Morgan who rebuilt the place, said Isaac, revealing that on a previous outing, he’d been bitten. His mission had never been about getting back to Rachel himself, it had been about getting Morgan to her. When Josiah attacked again — guys, you really do have to kill the hired assassin who’s trying to off you! — Morgan stabbed and then beheaded him, in effect, killing Good Morgan. 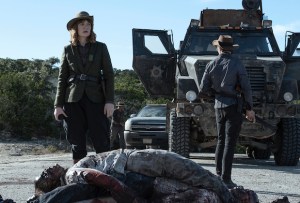 ‘THE END IS THE BEGINNING’ | As a baby’s cry rang out, Isaac ran to meet his daughter, and Morgan, well past pooped, passed out. When he awakened, Rufus was kissing him, the bullet was out of his shoulder, his eyes were already looking much better, and Isaac was no more. “We named her Morgan,” Rachel told her houseguest. Later, Morgan picked up Walter’s mysterious key from Josiah’s viscera, and traded his usual stick for his would-be killer’s badass axe. From there, we cut to Ginny and her Rangers being stopped by a roadblock of felled walkers in order to get her to open a box marked Morgan Jones. In it? Gwyneth Paltrow’s head. No, kidding. It was Josiah’s.

Spooked, Ginny took to the walkie-talkie to tell Morgan that “I thought I needed you to be dead for this to work, but I don’t… I just need ’em to think you are.” Cue the threats to kill everybody if ever Morgan showed his face again, etc., etc. Only then did Morgan speak up. “Morgan Jones is dead,” he intoned, “and you are dealing with somebody else now.” Somebody who was apparently far scarier than our old friend, the pacifist. As the Season 6 premiere came to a close, we cut back to the graffiti artist, who told his buddy that “they” should’ve been there by now and reminded him, mostly for our sake, I figure, that they needed that key. “We’re gonna have to wait somewhere else,” said his companion. And as the smoker finished painting “The End Is the Beginning,” aka the episode’s title, we saw that he was spraying on… was that a submarine?!?

What did you think of the Season 6 premiere of Fear the Walking Dead? Was anyone else sorry that Josiah was dispatched in one episode? Grade the hour in the poll below, then hit the comments with your reviews.