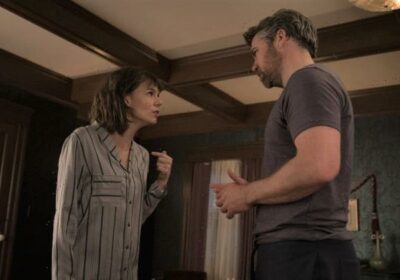 Andy returns in this week’s Evil. And by the end of the episode, I’m willing to bet that he’d rather cross the Khumbu Icefall armed only with dental floss and a pair of woolen mittens than try to figure out what the holy heck is up with Kristen these days.

She’s self-harming. She’s punching dudes in grocery stores. She’s demanding that he wear an animal mask while they have sex. It’s a bad scene when your mother-in-law — who’s currently worshipping a doll, remember — is in the right, but Andy, what Sheryl said is true: You’ve been gone too long.

There’s also some very intriguing God-helmet stuff that unfolds during the hour. Read on for the highlights of “B Is For Brain.”

HELLO, ANDY | Kristen is drinking the monks’ whiskey in the bathtub (ha!) when her girls announce that their father will be home in just a few minutes. She’s less than thrilled. But she pastes on a smile and goes down to greet Andy. When they’re alone later, he announces “I need sex,” and she’s into it, but she flinches when he pulls her close. Turns out, she has several cross-shaped burns on the skin of her abdomen, injuries she explains away by saying that she leaned into the stove by accident. Andy is incredulous, but the prospect of nookie distracts him… until she seems to get off on his hurting her by touching the wounds.

Don’t worry, it gets weirder. She grabs a bag from her closet and pulls out gags (did she steal those from the monastery?) and animal masks; he gets a rat, and she gets a tiger. They go at it, and it’s apparently a satisfactory experience for both of them. Yet when he wants to cuddle afterward, she skedaddles out of bed and doesn’t seem to care much when one of the girls sees her, still in mask and lingerie, in the bathroom.

GOING TO HELMET IN A HANDBASKET | The next day, Kristen, David and Ben are at a research lab. The scientists there are mapping the brain to investigate neurodegenerative disease, but the electrode-studded helmet they place on their subjects has been causing some to think that they’re communing with God. Kristen scoffs that the Vatican only wants them to look into the project to see whether technology can be used to convert people to the faith, though she concedes that stimulation of the temporal lobe — which the helmet does — could lessen depression and cause ecstasy, as one woman reports. The problem, though? Some test subjects report experiencing Hell while strapped to the unit.

So our trio decides to try it out. Ben is first. He has a vision of his dead mother, who tells him she wanted him to understand science but not reject Allah. “I did not reject Allah,” he tells her. “Allah rejected me.” Still, though, she takes him by the hand and they wander through their old neighborhood. But when a prostitute walks by and takes off her veil, she’s a scary, dark cloud of ghost. In the test are Ben rips off the helmet and runs from the room.

CLEANUP ON AISLE 2! | Kristen is next. But before we get to her experience, let’s talk about how Andy finds the red unicorn journal in her closet, and it’s filled with maps of houses (and are those sigils on them?). And later, when he and Kristen are in a supermarket and a douchey guy cuts them in line, Kristen goes to the frozen aisle, grabs a bag of French fries, and whallops the guy so hard that he hits the ground. (Real talk? Right before this, Kristen is telling Andy about how she misses the way they were before kids, when they “didn’t give a f—k,” and while my personal manifestation of this type of personality dissonance usually manifests in an ill-advised one-more-glass-of-wine-than-everyone-else-is-having, followed by tipsy online shopping at 2 am, I FEEL YOU, MAMA.)

Anyway, back to the helmet. As we watch, it seems like David is going next. But his vision is of Kristen, selecting an ice axe and then going to Orson LeRoux’s house to murder him with it. Kristen is shaken when David privately tells her what he saw; she hightails it to Kurt’s office, who advises that she confess to David, if nothing more than for the placebo effect, which could alleviate her physical symptoms. “THIS IS HER THING, ISN’T IT?” I write in my notes at this point, and it IS. She goes to David’s room at the rectory and when it opens, Leland is gnawing on David’s arm while David screams in pain on the floor.

She’s very disoriented when she takes off the helmet, and she can’t figure out why one of her boots is buckled now; it very clearly wasn’t before she donned the apparatus. Anyway, for real now, she runs to Kurt. He observes that she talks about David a lot, but that Andy is home after a long time away, and she’s barely mentioned him. “Reflect on what you want in this moment. If it’s your husband, it’s your husband. If it’s David, it’s David,” he says. But she says that David isn’t obtainable, because he’s about to become a priest. However, Kurt notes, “If he doesn’t become a priest, he’s not unobtainable.”

‘MAPS TO KILL PEOPLE’ | David is the last to put on the helmet… and he sees nothing. But Sister Andrea has an easy explanation for that — his visions are from God, not from being zapped by electrodes, she says — and they’ve got bigger problems, anyway. She faced off with Leland earlier in the episode and managed to stare him down by wielding a kitchen knife and a steel demeanor. But the bad guys are getting stronger, she warns. So she instructs him to meditate more and “start over,” because Leland will be back.

Ultimately, Bishop Marx is frustrated when David says the Vatican should not look into the helmet, Kristen says it “absolutely” should and Ben is torn. Back at home, after getting read for filth by Sheryl and her creepy puppet of the damned, Andy suggests that they sell the climbing business and that she quit her job, because something in it is “making you different.” She gets very angry very quickly, raising her voice as she protests that her work is “making me tougher. It’s making me more self-sufficient.” In fact, her job is “our lifesaver,” she says.

Her ire, though, is doused when Andy pulls out the unicorn journal and says that Laura told him that the blueprints are “maps to kill people.” Kristen starts crying, overcome, explaining that they’re a therapeutic tool to manager her anger. She’s so clearly done for the day, and he lays down behind her and puts his arm around her to comfort her.

Later on, though, when Andy is asleep, Kristen creeps downstairs. She heats a crucifix over one of the stove’s burners. When it’s glowing hot, she lays it on her bare stomach, presses it in and then claps a hand over her mouth to stifle her scream.

Now it’s your turn. What did you think of the episode? Sound off in the comments!