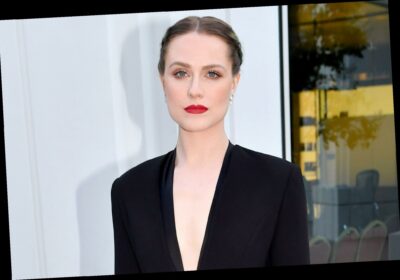 Evan Rachel Wood is sharing more details about the abuse she says she suffered while dating Marilyn Manson.

Wood, 33, claimed on her Instagram Story Friday that in addition to emotional and sexual abuse, Manson, 52, was prejudiced against her because of her Jewish heritage.

The Westworld actress shared a photo of two of Manson's tattoos which she suggests are swastikas and a Nazi-inspired symbol of a skull-and-crossbones.

"I was called a 'jew' in a derogatory manner," Wood wrote in one Instagram Story slide. "He would draw swastikas over my bedside table when he was mad at me."

"I heard the 'n' word over and over," she continued. "Everyone around him was expected to laugh and join in. If you did not or (god forbid) called him out, you were singled out and abused more." Wood said of that time, "I have never been more scared in my life."

"My mother is Jewish and I was raised with the religion," Wood continued in another slide. "Because she converted and wasn't of Jewish descent he would say things like, 'that's better' because I wasn't 'blood Jewish.'"

The actress added that Manson "did not have these tattoos when we started dating." Wood continued to say that the abuse was not part of "'kinky' sex."

"I thought I was going to die the entire time," she said.

Manson did not respond to PEOPLE's request for comment Friday, but he has previously contended that the allegations against him were "horrible distortions of reality."

On Monday, Wood said in an Instagram post that Manson "started grooming me when I was a teenager and horrifically abused me for years."

"I was brainwashed and manipulated into submission," she said.

She also shared similar stories from photographer Ashley Walters, model Sarah McNeilly, an artist who identified herself only as Gabriella as well as student Ashley Morgan. On Tuesday, artist and activist Love Bailey shared her own experience with Manson, claiming that he "put a big Glock to [her] forehead" during a photo shoot in 2011. On her Instagram Story Friday, Wood also shared screen grabs of people voicing their support for her and other survivors, as well as clips from her 2019 testimony advocating for the Phoenix Act, which lengthened the statute of limitations on domestic violence cases.

On Monday, Manson addressed the allegations against him with a brief statement on Instagram.

"Obviously, my art and my life have long been magnets for controversy, but these recent claims about me are horrible distortions of reality," he said. "My intimate relationship have always been entirely consensual with like-minded partners. Regardless of how — and why — others are now choosing to misrepresent the past, that is the truth."

Manson has since been dropped from talent agency CAA as well as his record label.

If you or someone you know has been a victim of sexual abuse, text "STRENGTH" to the Crisis Text Line at 741-741 to be connected to a certified crisis counselor.

If you or someone you know has been sexually assaulted, please contact the National Sexual Assault Hotline at 1-800-656-HOPE (4673) or go to rainn.org.