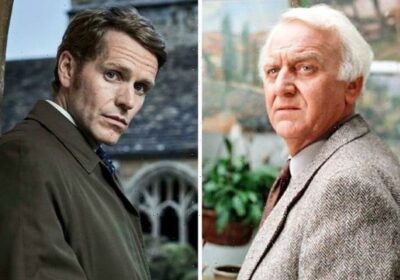 Endeavour: Fred reveals that Morse is the 'drunk on the bus'

The eight season of the gritty Inspector Morse prequel series wrapped up last week on ITV. Although Shaun Evans and Roger Allam have both expressed interest in returning for another outing of Endeavour, the lead actor still hasn’t seen a single moment of the classic crime drama.

Shaun Evans has admitted he has never seen a single episode of the original Inspector Morse, starring John Thaw in the titular role.

Despite being one of the most iconic screen characters in British history, Evans says he was the wrong age to have seen the show during its original run.

When it came to embodying a younger Morse himself, he revealed he wanted to create his own version of the character rather than drawing from his predecessor.

He told the Guardian recently: “I knew this Morse had to come out of my imagination.”

“So I told them from the start that, if they wanted an imitation of someone else, I was the wrong guy.”

Although Evans’ performance is still recognisable as Morse, he has managed to make the character his own in the nine years he’s spent portraying the character.

Now 41, Evans was born in 1980 and would have been a little too young to watch Inspector Morse when the detective drama debuted in 1987.

He explained: “I was born in 1980, so wasn’t the right age when Inspector Morse went out.”

“I was working in America when they offered me the part so it was easier to go and buy one of the books.”

The original run was based on a series of detective novels by English author Colin Dexter.

While Evans was able to familiarise himself with the character before starting work on the first episode, he still hasn’t sat down to watch the show all these years later.

“I did buy all the DVDs later,” the star recalled.

“But [I] never watched them. Maybe I will when we’re done.”

Thankfully there’s still no sign of the series slowing down, as both Evans and his co-star Roger Allam are interested in reprising their roles at least one more time.

Unfortunately, this means it may be some time before Evans watches John Thaw’s original interpretation of Endeavour Morse.

Revealing more about his preparation for the character, Evans avoided drawing from the classic series to make this detective his own.

Rather than studying Thaw’s performance, he worked with voice coach Penny Dyer to find the right tone.

“A 60s period voice of someone who was from the north, from a middle-class family, but went to Oxford University,” Evans clarified.

Endeavour has now reached the milestone of 33 episodes, the number reached by John Thaw’s original run as Morse.

Although ITV have yet to confirm a ninth instalment, the prequel has truly established itself as its own entity and is expected to overtake the series with another three episodes next year.

Endeavour season 8 is available to stream on ITV Hub.