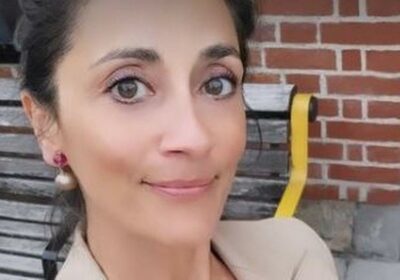 The 47-year-old actress, who plays Dr Manpreet Sharma, squeezed into a tiny top that plunged at the neckline as she posed for a selfie following a long day of filming.

The soap star showcased her ageless beauty, teaming her look with a leather jacket and a pair of black sunglasses.

Taking to her Instagram Stories, Rebecca used the behind the scenes snap to give fans a glimpse of what to expect during Christmas on the ITV soap.

The star added: "Disclaimer – no cars were driven in the making of this story #carparkselfie #filming #finishedfortheday #backtomorrow."

The teaser comes after an explosive few weeks in the village as the character's deal with major deaths.

While Harriet Finch and Liv Dingle had their lives taken by the storm, the devastation was far from over as Al Chapman was recently murdered.

Earlier this week, Al was found dead in a barn with Cain holding a shotgun pointed in his direction.

While all fingers point to Cain, fans are not so certain and have taken to social media with their theories of who pulled the trigger.

Aaron Dingle (Danny Miller), who recently departed the village once again, was high on the lists of suspects.

Convinced it was Chas's son, one social media user wrote: "This shooting has Aaron all over it.. Cain was just there."

While a second agreed: "I've got a feeling Cain didn't do it and is protecting someone Aaron perhaps??

Another theory was that Chas – Al's lover and Cain's sister, could be the true culprit as one viewer said: "#Emmerdale Chas deffo already knows. She was there. She pulled that trigger! There’s no way it was Cain… but he’ll cover for his sister!"