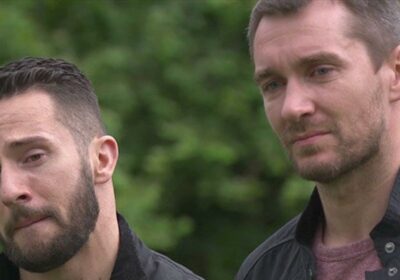 Two Emmerdale stars showed that their sibling rivalry is alive and well as they became embroiled in an Instagram spat.

Michael Parr, who rose to fame as Ross Barton in the ITV Dales, reignited his brotherly feud with Anthony Quinlan – AKA his Emmerdale brother Pete Barton.

Mike took to Instagram this week to post a casual snap which saw him relaxing on a city rooftop, snuggled in a varsity jacket and a black hoodie.

He opted for a pair of black jeans to complete the look, grooming his brunette facial hair into a neatly coiffed beard and gazing off into the distance for a candid shot.

Michael captioned his snap: "Got to get me a Samsung S22 Ultra."

He tagged a pal in the snap and branded him his "newly appointed personal photographer" in a cheeky quip.

But Anthony clearly wasn’t impressed with either the picture or Michael’s choice of phone, as he quickly posted in the comments section: "Eww. Send it back!" with a sickened emoji.

Luckily, Mike wasn’t taking offence as he cheerfully clapped back at his former co-star: "Phat PT."

Another of the actor’s pals was similarly divided by the snap, as he giggled: "I’d send it back. You can see all your wrinkles now in HD!"

While his supportive fans chimed in: "Omg how fit do you look!"

"Looking great mate," someone else followed up, as another fan penned: "How are you this f***ing adorable?"

It’s clear Michael hasn’t fallen out of touch with his former Emmerdale co-stars, as he and Joe Tate star Ned Porteous had a very cheeky exchange about strippers.

Michael announced he was playing a stripper in a new project, snapping a picture of himself wearing a police uniform and explaining: "When you’re playing a chicken dipper (stripper) and they shave all your body hair off and cover you in fake tan!!!"

Shortly after the cheeky spat, Michael left his fans baffled as he posted a selfie of him standing against a green screen in a Roman tunic.

Some even speculated that he could be joining the cast of ITV2 period sitcom Plebs – which Coronation Street star Michelle Keegan has already appeared in.

One begged in the comments section: "Plebs part 4 perhaps??"

As another wondered: "What’s this from? When and where can I see it?!"

"Do we get to see your legs with the snazzy Roman sandals?" someone else asked.