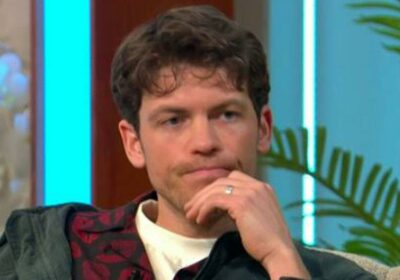 Emmerdale star Darcy Grey, who recently joined the long running ITV soap, has shared a memory with his fans on Instagram – claiming he was kicked out of an "elite" restaurant.

The actor, who plays newcomer Marcus Dean, took a moment to recall a story about when he was 'kicked out' of a restaurant one rainy day.

Darcy posted a picture of himself in a grey sofa on the Lorraine set, wearing grey jeans, a black hoodie, black shoes and a white top as she chatted with the host.

He called the picture a “flashback” to his “TV days” at ITV.

The actor said that he “remembered it being cold” and that the weather took a turn.

“It began to rain outside after the interview. I was starving, to which the solution – I thought – was the charming Soho house casually next door, a shelter from the rain. I asked if they did eggs, to which a very smiley lady responded with a very emphatic nod.”

He continued and said he “sat down, ready for the feast", adding: “Fast forward two short minutes later [and I was getting] kicked out, not so emphatically, and unable to be served as I wasn’t a member of the elite. What a quick rush off the mountain top back to normality that was,” and ended with a laughing emoji.

Fans thought his anecdote was hilarious and took to the comments to share their thoughts.

One joked: "That’s life doing you a favour. The eggs were probably off."

A follower told him that “they’ve all been there” while another suggested he may have been “too elite for them”.

A kind fan gushed that he was “looking good” and another called it a “lovely picture”.

His Emmerdale character, Marcus, is the son of former villain Pierce Harris and has developed close relationships with some of the village residents, including Ethan Anderson.

In real life, Darcy married his long-term girlfriend Christine Lisowski in 2014 and the pair have been married for eight years.

However, not much else is known about their relationship as the couple tend to keep their business out of the public eye.

Darcy has not even shared a picture of his spouse on social media.