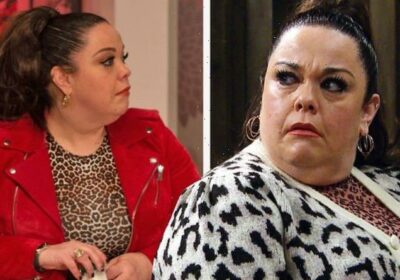 Emmerdale’s Mandy Dingle (played by Lisa Riley) has not had the best luck when it comes to men. In the spring of 2020, the fan-favourite character came face to face with her ex, Paul Ashdale (Reece Dinsdale) and after some convincing, they reunited and were set to get married. However, the truth about Paul’s gambling lying and abuse towards their son Vinny Dingle (Bradley Johnson) was eventually exposed and in dramatic scenes which aired earlier this year, he died in a barn explosion leaving Mandy feeling all kinds of emotions. In recent episodes, however, Mandy has had an unlikely dalliance with Jimmy King (Nick Miles) which fizzles out as quickly as the flame ignited. So who is the perfect man for Mandy? The actress who plays the iconic Dingle spoke to Express.co.uk and other press about the pairing she would like to see.

For the last few months, Jimmy and Nicola King (Nicola Wheeler) have been experiencing a rough patch in their marriage.

Recently, they had a difficult few weeks dealing with Jimmy’s trial for Paul’s murder which saw the haulage driver mistake Mandy’s kindness as a sign of romantic interest.

Realising he needed to try and fix his marriage, Jimmy and Nicola tried to inject some much-needed romance but they resorted back to discussing the issues in their relationship.

In upcoming scenes, after harbouring the guilt of kissing Mandy, Jimmy will admit his behaviour to Nicola and she, “in true Nicola fashion goes ballistic and kicks Jimmy out”.

While Jimmy and Nicola’s relationship is over, could there be something more between Jimmy and Mandy?

“Other than being best friends, [no],” Lisa said. “I think they’ve both gone though this turmoil after Paul’s death, Mandy didn’t really have anybody to turn to who completely understood, and Mandy being Mandy, her demeanour, she’s come across as flirting.

“She doesn’t want any turmoil to become between Nicola and Jimmy,” in fact she’s been the one trying to get their “relationship back”.

Lisa explains how Jimmy has mistaken Mandy’s kindness as romantic interest: “She’s [Mandy] trying to patch up their marriage and he’s read the signals completely wrong.

“When the kiss happens I do believe for certainly that week, after the court case, there’s a little twinkle in Mandy who thinks ‘we are sharing this pain’ but then she completely snaps back and realises she just has to be there and support him,” the actress continue.

So if Jimmy isn’t the man for Mandy, who is?

“[And] I just love working with Joshua, he’s a real dream.

As for what happens when Nicola finds out Jimmy and Mandy kissed, the two women end up having a food fight.

While Nicola and Jimmy are separated, the pair agree to tell their children nothing until after Angel’s birthday.

The actress who plays Nicola explains: “On the morning of Angelica’s party, Jimmy arrives late and it’s because he’s found an apartment [to move into], so it [their marriage being over] becomes very real at that moment.

“Although they are celebrating their daughter turning 12 years old, they’re also commiserating the end of their marriage. So I think Nicola is very depressed and it struggling to keep it under wraps because she’s all smiles for the children and then Mandy turns up and it’s like a red flag to a bull.”

This is when Mandy overhears Nicola badmouthing her and Vinny and realising she won’t be talked about, Mandy takes action and whacks Nicola on the head with a huge inflatable.

It isn’t long before both women are brawling and birthday food is flying.

Speaking about this scene, Nicola added: “[My character] deserves a what on the head, she is vile about Mandy’s mothering when of course, we all know it was Paul who was the bad parent not Mandy.

Mandy has been in her fair share of fights over the years, but how does this one with Nicola compare?

“This is definitely the most fun I’ve ever had,” Lisa confessed. “It was just brilliant and I was knackered.

“The next day we had to come in and we had more stuff to shoot, I was so tired because you literally spend all day being physical… running around screaming and shouting at each other and then laughing.

“It was brilliant and great fun.”